Oviedo ( oh-VEE-doh) is a city in Seminole County, Florida, United States. As of the 2010 United States Census, the population was 33,342, representing an increase of 7,026 (26.7%) from the 26,316 counted in the 2000 Census. It is part of the Orlando–Kissimmee–Sanford Metropolitan Statistical Area. Oviedo is known for its historic houses and buildings, as well as its population of chickens that roam the downtown area. Although the city has historically been rural, in recent years it has had an influx of new developments to support its rapid growth, due to its proximity to the University of Central Florida and the Central Florida Research Park. Several national publications have placed Oviedo on their nationally ranked lists as one of the best places to live in the US.

In the late 1870s, individuals living a couple miles south of Lake Jesup needed an easily accessible post office in the Florida back country. Andrew Aulin, an early settler and shop-owner, decided to file paperwork for a post office; in his first site location report he needed a unique name, one that no other post office in Florida had. Aulin liked having a Spanish name, "to go with the Spanish name of the state," and decided to name his post office location Oviedo after the city of Oviedo in northern Spain (the capital city of the Principality of Asturias) and the University of Oviedo. Some say he visited the University, others say he just liked the sound, most agree he likely pronounced it "Oh-vee-Ay-Doh" rather than the Americanized way of "Oh-VEE-doh."

The city of Oviedo has received several accolades in national publications:

Up through the early 19th century, the area encompassing Oviedo was sparsely populated save for a few Seminoles and African-American Freemen who associated with the Seminole tribe, known as Black Seminoles, in what was then Spanish Florida. The Seminole tribe had larger clusters of population in other areas of Central Florida, such as nearby Lake Jesup.

The population remained sparse until after the American Civil War, when people devastated by war starting moving South to begin a new life. One mile to the southeast side of Lake Jesup, a small hamlet of settlers established the "Lake Jesup Settlement" in 1875. Letters from that era showcased a difficult life for the Florida Cracker settlers: cooking outdoors with wood stoves, sleeping under mosquito nets, and burning rags to keep the insects away. Wildlife was plentiful, however. Initially, this settlement had around 40 families, but quickly evolved into a thriving trading port. The settlement was named "Oviedo" by Andrew Aulin when the first post office was established to honor the state's Spanish heritage.

Several people played a prominent role in establishing Oviedo's history. George Powell was an early settler who ran a large tract of land, referred to as the "Powell Settlement", which today encompasses most of the northern part of the city—including the downtown area. One of Powell's sons, Lewis Powell, (alias Lewis Payne), became infamous for being John Wilkes Booth's primary accomplice in the plot to assassinate President Abraham Lincoln.

George Powell's friend, Dr. Henry Foster, was instrumental in transforming Oviedo's citrus and celery industry from obscurity to prominence by giving Oviedo reliable transportation to deliver its goods. He paid for a railway link to Oviedo and founded the Lake Jesup Steamboat Company. Agriculture was Oviedo's primary industry all the way through the 1940s. Dr. Foster was also responsible for establishing the Lake Charm area as a resort to entice visitors from the North to vacation in the winter. Dr. Foster encouraged settlers to begin attending regular church services on a site of the "Powell Settlement" that would become the First Methodist Church of Oviedo.

A citrus-grower named Butler Boston is also credited for helping establish Oviedo's citrus economy by successfully grafting tangerine budwood to grow tangerines, as well as budding the succulent Temple orange from Jamaica to several Oviedo fields. Butler Boston was the son of an African-American doctor who moved to Oviedo in 1871 to both set up a medical practice and buy a farm. His father gave the land to his son after a freeze when he moved back to Georgia. Boston was so successful that he was hired to bud other Oviedo fields. He became a spokesman for the large black community in the area, and was especially devoted to improving their educational opportunities, and served as a local school trustee. He was also an accomplished bricklayer and oversaw the planning and construction of a new building for the Antioch Baptist Church. His legacy is noted today throughout Oviedo, in sites such as Boston Street, Boston Alley, Boston Cemetery, Boston Hill and Butler Boston Court. His home site is where Canterbury Retreat and Conference Center is located. It’s centerpiece is Lake Gem, named by the Boston family for a close family member.

Andrew Duda Sr., a Slovak immigrant, established a farm in nearby Slavia in the early 20th century. He left after failing to produce successful crops, but saved up money and returned in 1926 to try again. The second time, he was extraordinarily successful and his farm survived even through the Great Depression. In fact, in 1939, he was able to build St. Luke's Lutheran Church, which has since expanded into a large Lutheran community. The Duda family started a sod division in the 1970s that has since flourished and continues today. The west entrance of Oviedo cuts straight through the sod farm.

Oviedo experienced a major growth spurt during the boom years of the 1920s, and new buildings and banks were built on the main street of downtown, named "Broadway". Some of these buildings still remain, along with the complex of buildings surrounding the Nelson and Co. packing house, which was the center of Oviedo's agricultural industry for decades. This agricultural complex eventually shut down for good during the 1980s after a series of winter freezes. At that time, commercial development had already replaced agriculture as Oviedo's main industry.

Oviedo made the transition from a rural hamlet, to a town, and then, in 1967, became a city through a special referendum. Five miles south of Oviedo, in 1963, residents learned about the impending building of a "space university" in the Orlando Morning Sentinel. Many faculty and staff members of Florida Technological University (now the University of Central Florida) moved into Oviedo, and new businesses and industry soon followed. The adjacent Central Florida Research Park, originally established in 1978, has since become the largest research park in Florida. This has resulted in an exploding population with many new developments in recent years. As the city has grown, its animals have remained a part of the city's character. Although hogs can no longer can be seen walking free, chickens and roosters continue to roam the downtown area and have become an Oviedo attraction.

Most of the buildings in the downtown historic area were constructed between the end of the 19th and early 20th century. The Nelson and Company Historic District, the R.W. Estes Celery Company Precooler Historic District, the First Methodist Church of Oviedo, and several houses in Oviedo are listed in the National Register of Historic Places. The nearby Oviedo Mall features murals of historic areas along with pictures of early European and African-American settlers in the area.

Route 434, which cuts through downtown Oviedo, is currently being widened and several buildings have been demolished. The Oviedo Preservation Project has been tasked with photographing and documenting the buildings for posterity.

Although not located in the downtown area, the historic Lake Charm settlement is nearby. This settlement, established by Dr. Henry Foster in the 1860s, became one of the first resorts in Florida. It lasted as a resort until the 1890s. Several winter homes built during that era still stand today.

In 2015, the city of Oviedo dedicated a brand new downtown development just south of the current "old downtown" along Oviedo Blvd. The new town center, named "Oviedo on the Park", is a mixed use development with townhouses, apartment homes, restaurants, and retail. It is centered around the new Center Lake Park with a man-made lake, large amphitheater, playground and Veterans Tribute.

A 64-bed hospital called the Oviedo Medical Center opened in January, 2017. A new Emergency Room (ER) hospital, called Oviedo ER, was completed in 2014. Oviedo ER is a department of Central Florida Regional Hospital. The Oviedo ER is located on the corner of Red Bug Lake Road and West Broadway.

The Oviedo Mall, a single-story indoor mall with a movie theater built in 1998, has recently undergone a large-scale renovation by its new owners, 3D Investments. BJ's Restaurant & Brewery opened across from the Oviedo Mall in August 2014. Paul Stanley and Gene Simmons of the rock group KISS hosted a grand opening celebration for their new Rock & Brews in Oviedo in January 2015. In January 2016, Oviedo's new, expanded Townhouse Restaurant opened a few hundred feet from their old, iconic establishment, which was demolished to make room for the new road project.

Black Hammock Adventures is a complex that offers airboat rides and a display of live gators. Lukas Butterfly Encounter is also located in Oviedo. The Pinball Lounge, located in the Oviedo Bowling Center, has the largest concentration of pinball machines in the state.

The "Oviedo Lights" is a local roadside attraction. A mural dedicated to the phenomenon is painted on the wall of the local Tijuana Flats.

This annual event is held the last Saturday each October and invites the entire town to travel a 5K route that leads past 10 historic sites, then "enjoy a homemade pancake breakfast while watching an interactive performance from actors in costume portraying Oviedo's founders, who are back from beyond the grave for one magical weekend." This is a kid-friendly event not designed to be scary, but to educate people on the town's history. 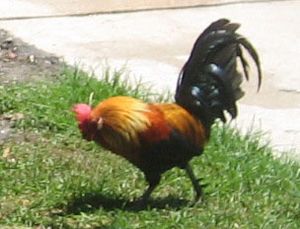 A chicken in Oviedo

Part of Oviedo's southern charm is the population of chickens that roam the downtown area. There are so many of them roaming the area that traffic often stops as they cross the roads. The chickens have been featured on Oviedo T-shirts and coffee mugs and a poster commemorating one of Oviedo's yearly festivals, "A Taste of Oviedo." An image of a rooster is painted on all welcome signs for roads leading into Oviedo, and many residents have bumper stickers that say, "I brake for Oviedo's chickens".

Contrary to what some believe, there are no specific laws or statutes surrounding the chickens, neither for their protection nor for their removal - the latter being something some residents would like to see due to the danger they pose with traffic in the congested town center. For others, however, the chickens add an element of fun.

There are City Ordinances that protect birds in the City Limits, the entire city is designated a bird sanctuary. Chickens are afforded the courtesy of protection under the code.

The chickens were also the subject of a short documentary that was part of the Florida Film Festival 2009.

There are also wild peacocks that roam the downtown area as well.

All content from Kiddle encyclopedia articles (including the article images and facts) can be freely used under Attribution-ShareAlike license, unless stated otherwise. Cite this article:
Oviedo, Florida Facts for Kids. Kiddle Encyclopedia.