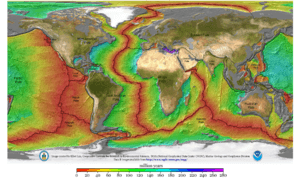 Map of the age of the sea floor made from data about changes in the magnetic field.

Geophysics is the physics of the Earth and its environment in space. It is also the study of the Earth by measuring things and collecting data. Sometimes geophysics means only studying the geology of the earth such as its shape, gravitational and magnetic field, internal structure and composition. It is can also mean how those create plate tectonics, magmas, volcanism and rock formation.

Geophysics was only recognized as a special area of study in the 19th century. But, there were geophysicists in ancient history. The first magnetic compasses were made in the fourth century BC and the first seismoscope was built in 132 BC. Isaac Newton applied his theory of mechanics to the tides and the precession of the equinox. Instruments were developed to measure the Earth's shape, density and gravity field, as well as parts of the water cycle. In the 20th century, geophysical methods were developed for remote exploration of the solid Earth and the ocean.

Studying geophysics may help with problems such as mineral resources, reducing natural hazards, and protecting the environment. Geophysical survey data help find petroleum reservoirs, mineral deposits, groundwater, and archaeological relics. Such data can also tell the thickness of glaciers and soils, and tell which areas have environmental damage that should be fixed.

All content from Kiddle encyclopedia articles (including the article images and facts) can be freely used under Attribution-ShareAlike license, unless stated otherwise. Cite this article:
Geophysics Facts for Kids. Kiddle Encyclopedia.