Douglas A-3 Skywarrior facts for kids 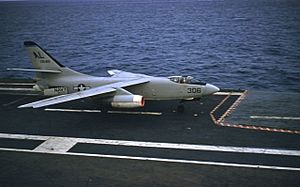 The Douglas A-3 Skywarrior is an American twin-turbojet military aircraft. Its first flight was in 1952. It was first used in 1956. It was originally designed and built as an attack aircraft. Later it was optimized for aerial refueling and electronic warfare as KA-3 and EA-3. The US Navy used it from aircraft carriers for the Vietnam War. The B-66 Destroyer is a variant built for the US Air Force. The Douglas A-3 Skywarrior has been out of service since 1991.

All content from Kiddle encyclopedia articles (including the article images and facts) can be freely used under Attribution-ShareAlike license, unless stated otherwise. Cite this article:
Douglas A-3 Skywarrior Facts for Kids. Kiddle Encyclopedia.