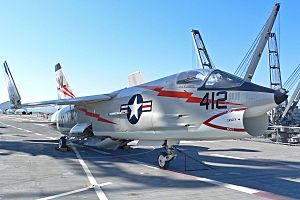 The F-8 Crusader was an American fighter plane made by Vought. It first flew in 1955, and went into the Navy and Marine corps in 1957. It was the only fighter plane in the Vietnam War to have both guns and missiles on it. It was slowly replaced by the F-4 Phantom II and was retired in 1999. There was also a different type of it called the RF-8 Crusader, meant for spying. It also took the pictures of Soviet missiles during the Cuban Missile Crisis.

All content from Kiddle encyclopedia articles (including the article images and facts) can be freely used under Attribution-ShareAlike license, unless stated otherwise. Cite this article:
Vought F-8 Crusader Facts for Kids. Kiddle Encyclopedia.