Inverness is a city in Citrus County, Florida, United States. As of the 2020 census,the population was 7,543. It is the county seat of Citrus County and is home to the Citrus County Courthouse and near the 10,950-acre (4,430 ha) Flying Eagle Preserve.

The city of Inverness was originally named "Tompkinsville". Settlement of the area dates back to 1868. A. D. Tompkins, later known as "Uncle Alf", started the community. To attract newcomers to the town, he established mail service and helped erect the first sawmill in the county. He gave his brother-in-law, Frank M. Dampier, Sr., a lot to build a store, with Dampier becoming the first merchant in town. Dampier is credited with laying out the town and naming it Tompkinsville.

Not many years later, the town of Tompkinsville was sold to a firm in Jacksonville, and the name was changed to "Inverness". According to the late historian Mary McRae of Homosassa, Inverness got its name from a lonely Scotsman, far away from his home, who gazed upon the blue waters of the Native American-named Tsala Apopka Lake and thought the area looked like the headlands and lochs of Inverness in Scotland. Inver is a Gaelic word meaning "mouth of the river", and through the Scottish city flows the River Ness, originating from Loch Ness. Since the Florida city lies at the foot of one of the chain of lakes in Citrus County, Inverness seemed an appropriate name. Per official city documentation, Inverness was incorporated on March 6, 1919.

Over twelve downtown buildings have been recognized by the historic plaque program and are presently active places for business. Central Business Development grants have helped to retain the historic character of the city. In 1961 the historic courthouse downtown was used to film the courtroom scene of "Follow That Dream" featuring Elvis Presley.

The city has been designated a "Gateway Community" by the Florida Trail Association. Since 1995, Inverness has been recognized as a Tree City USA by the National Arbor Day Foundation and the US Forest Service. In 2009, Inverness was named "City of the Year" by the Forty and Eight, a national veterans' organization.

The last full weekend in October is reserved for the Great American Cooterfestival, named after the Florida cooter turtle. A family-focused event of music, games, crafts and more is held at the adjoining Liberty and Wallace Brooks parks on Lake Henderson.

Since 1971 the first weekend in November marks the Festival of the Arts, a juried fine art show that has grown to include over 100 artists.

Inverness is home to the Lakes Region Library, which is part of the Citrus County Library System. The library offers several recreational classes such as Tai Chi, painting, gardening, basic technology usage, children and teen programs, and more. Times and services are listed on the library's website. 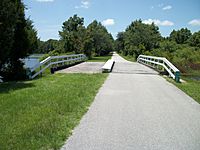 The Withlacoochee State Trail, which replaced a former Atlantic Coast Line Railroad line, runs between two of the chained lakes, with small bridges replacing former railroad trestle crossings. The trail offers access to 46 continuous miles of enjoyment for biking, jogging and walking. The Inverness trailhead can be found on North Apopka Avenue (CR 470) across from the trail crossing and Liberty Park.

The city is served by Citrus County Schools. Residents are divided between Inverness Primary, Pleasant Grove Elementary, and Hernando Elementary. All residents are zoned to Inverness Middle School, and Citrus High School.

The Lakes Region Library of Citrus Libraries is in Inverness.

All content from Kiddle encyclopedia articles (including the article images and facts) can be freely used under Attribution-ShareAlike license, unless stated otherwise. Cite this article:
Inverness, Florida Facts for Kids. Kiddle Encyclopedia.