Brooksville is an incorporated city in and the county seat of Hernando County, Florida, United States. It is a suburban city included in the Tampa-St. Petersburg-Clearwater, Florida Metropolitan Statistical Area.

Brooksville was named in 1856 for Preston Brooks, a congressman from South Carolina known for his vicious beating of abolitionist Senator Charles Sumner. Brooksville is home to historic buildings and residences including the home of former Florida Governor William Sherman Jennings and football player Jerome Brown.

The geographic center of Florida is located twelve miles north-northwest of Brooksville.

Brooksville was once a major citrus production area and was known as the "Home of the Tangerine".

There were 3,220 households out of which 23.7% had children under the age of 18 living with them, 39.9% were married couples living together, 14.0% had a female householder with no husband present, and 43.1% were non-families. 38.5% of all households were made up of individuals and 19.1% had someone living alone who was 65 years of age or older. The average household size was 2.14 and the average family size was 2.82. 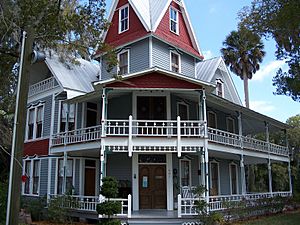 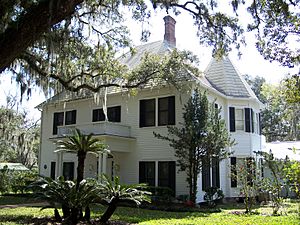 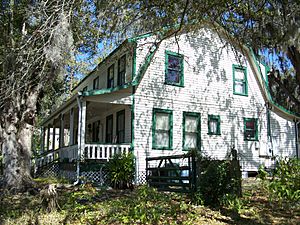 Fort DeSoto, a military fort established about 1840 to give protection to settlers from Native Americans, was located at the northeastern edge of present-day Brooksville on Croom Road about one-half mile east of U.S. Highway 41. Fort DeSoto was also a trading post and a regular stop on the Concord Stage Coach Line which ran from Palatka to Tampa.

The fort was built on top of a heavy bed of limestone, a fact which they were unaware of at the time, and this made it exceedingly difficult to obtain water, thus causing this location to be abandoned as a community site. As a result, in the early 1840s the population shifted about three miles to the south where a settlement first formed by the Hope and Saxon families became known as Pierceville. About this time, another community about two miles northwest of Pierceville, named Melendez, was formed.

In 1850 a post office was established at Melendez. In 1854 it was replaced by a post office at Pierceville. Both towns were situated in the area that would become Brooksville.

In 1856 the county seat of Hernando County became the newly named town of Brooksville. The name was chosen to honor Preston Brooks. Brooks, a congressman who nearly caned abolitionist Senator Charles Sumner to death in 1856 on the floor of the Senate after Sumner gave an anti-slavery speech and disparaged Brooks' uncle, Senator Andrew Butler. The Pierceville post office was not renamed for Brooksville until 1871.

During the Great Depression, Brooksville suffered from a lack of currency. The School Board paid teachers with chits, and Weeks Hardware "accepted chickens and sides of bacon" as payment.

Brooksville is a residential-commercial community. There are several modern medical facilities in the area including Brooksville Regional Hospital Inc., Oak Hill Community Hospital and Spring Hill Regional Hospital and a campus of Pasco-Hernando State College at the edge of the city. The business section includes eleven shopping centers and a public airport, Hernando County Airport, located six miles south of the city. There are three city parks with walking trails, sports, and picnicking facilities, including a nine-hole golf course and a library. The area also offers abundant hunting, fishing, biking and (in Nobleton just 12 miles NE of Brooksville [1]) canoeing, kayaking and camping opportunities.

Jerome Brown, defensive tackle for the Philadelphia Eagles, graduated from Brooksville's Hernando High School, where he was often seen in the off season running laps around the track. In June 1988, he received praise for his calm demeanor as he helped disperse a group of Ku Klux Klan protesters in his hometown of Brooksville. Brown died on June 25, 1992, at the age of 27, after he lost control of his ZR1 Chevrolet Corvette at high speed and crashed into a utility pole in Brooksville. Both he and his 12-year-old nephew, Gus, were killed in the accident. Brown was buried in Brooksville. In 2000, the Jerome Brown Community Center was opened in Brooksville in memory of Brown.

A minor controversy arose in the summer of 2010 when local media and activists brought attention to the origin of the town's name, calling it "shameful." The suggestion was made that the town should change its name in order to distance itself from its pro-slavery history. This idea was overwhelmingly opposed by locals and not entertained by the city council. However, the city's official website did remove a page which discussed the Brooks/Sumner encounter and cast Brooks in a positive light.

Brooksville is served by THE Bus's Purple route.

All content from Kiddle encyclopedia articles (including the article images and facts) can be freely used under Attribution-ShareAlike license, unless stated otherwise. Cite this article:
Brooksville, Florida Facts for Kids. Kiddle Encyclopedia.