Dunnellon is a city in Marion County, Florida, United States. The population was 1,733 at the 2010 census. It is part of the Ocala Metropolitan Statistical Area.

There were 950 households, out of which 18.5% had children under the age of 18 living with them, 44.6% were married couples living together, 11.4% had a female householder with no husband present, and 41.5% were non-families. 37.3% of all households were made up of individuals, and 24.4% had someone living alone who was 65 years of age or older. The average household size was 2.00 and the average family size was 2.59. 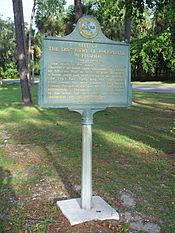 Plaque marking the discovery of phosphate in Dunnellon

Dunnellon was founded in 1887. In 1889, phosphate was discovered in the area, leading to an expansion of the area until the early 1910s. The original mining took place in and around the Rainbow River (formerly called 'Blue Run'), using the river's natural flow to transport phosphates. What is now the 'Blue Cove' subdivision, was one of the original mining pits.

Areas in and around Dunnellon served as filming locations for the 2001 horror film Jeepers Creepers, with a great deal of location work on Tiger Trail (a.k.a. High School Road), the road to Dunnellon High School, officially known as SW 180th Avenue Rd., just outside Rainbow Springs State Park. 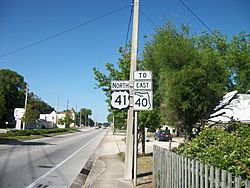 Northbound US 41 where it shares a hidden concurrency with SR 40.

All content from Kiddle encyclopedia articles (including the article images and facts) can be freely used under Attribution-ShareAlike license, unless stated otherwise. Cite this article:
Dunnellon, Florida Facts for Kids. Kiddle Encyclopedia.