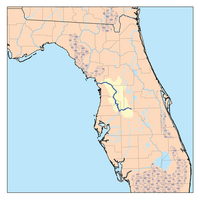 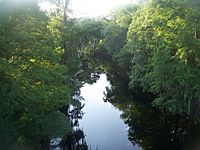 The Withlacoochee River (or Crooked River) originates in central Florida's Green Swamp, east of Polk City. It flows west, then north, and then turns northwest and finally west again before it empties into the Gulf of Mexico near Yankeetown. The river is 141 miles (227 km) long and has a drainage basin of 1,170 square miles (3,000 km2). It is believed to have been named after the Withlacoochee River to the north.

Along its route are the 46-mile-long (74 km) Withlacoochee State Trail, the longest paved rail trail in Florida, the Cypress Lake Preserve, a 324-acre (1.31 km2) park with approximately 600 feet (180 m) of frontage, and Nobleton Wayside Park, a 2-acre (8,100 m2) park in Nobleton that includes a boat ramp, shelter, basketball court, and picnic tables.

The Southwest Florida Water Management District has a 5,484-acre (2,219 ha) nature preserve and recreational area with 3.7 miles (6.0 km) of frontage on the Withlacoochee River in Citrus County. The property was purchased for $13.5 million in 2005 from the South Florida Council, which had used it as the "McGregor Smith Scout Reservation".

"Withlacoochee" probably stems from a Muskhogean dialect, which suggests that its application is comparatively recent. It is compounded of Creek we (water), thlako (big), and chee (little), or little big water. This word combination signifies little river in the Creek language, and as we-lako or wethlako may also refer to a lake, it may signify a river of lakes, or lake river. The Withlacoochee flows just to the eastward of Tsala Apopka Lake, and the St. Johns River which flows through a series of large and small lakes was called welaka by the Seminoles. An alternate etymology holds that Withlacoochee is a Native American word meaning "crooked river", which accurately describes the river as it makes its 70-mile journey from the Green Swamp in northern Polk County to the Gulf of Mexico at Yankeetown.

All content from Kiddle encyclopedia articles (including the article images and facts) can be freely used under Attribution-ShareAlike license, unless stated otherwise. Cite this article:
Withlacoochee River (Florida) Facts for Kids. Kiddle Encyclopedia.