Hawthorne is a city in Alachua County, Florida, United States, incorporated in 1881. Indigenous peoples of the Americas had been living in the area since around 100 CE; Hawthorne grew around their trading trails. Throughout its history, Hawthorne has been known for its agriculture, railroad, and rural lifestyle. Hawthorne's population was 1,417 at the 2010 census, with an area of 7.06 sq mi (18.3 km2).

Hawthorne was laid out in 1881 on land owned by James H. Hawthorne. A post office was established as Hawthorn in 1880, and the spelling was changed to Hawthorne in 1950. 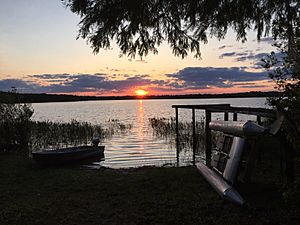 Hawthorne is served by the Alachua County Public Schools, which operates Shell Elementary School and Hawthorne Middle/High School. The Alachua County Library District has a branch library in the city. The elementary school was named after Chester Shell, who spearheaded a campaign to open a school for black children in Hawthorne. The school for black students opened in 1922 as Hawthorne High School. Schools at that location were known as Hawthorne High School, Shell High School, Shell Middle School, and Shell Elementary School. 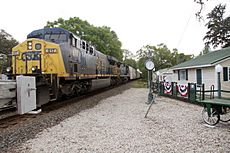 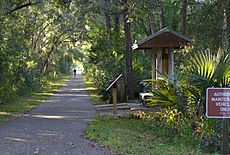 CSX Transportation owns the north–south rail line which runs through Hawthorne, and operates a station. The line, part of the Wildwood Subdivision, is used for freight. Its Edgar spur runs from Hawthorne to Edgar (near Interlachen), and the 1912 railroad station is used as a business.

The Gainesville-Hawthorne State Trail connects Gainesville to Hawthorne with a sixteen-mile, paved trail. The trail runs through conservation areas in Alachua County that features wetlands, upland hammocks, and pine flatwoods, and can be used for walking, cycling, and (in parts) horseback riding. It was created through the Rails-to-Trails program, which converted the abandoned railroad between Hawthorne and Gainesville to a recreational trail.

The Department of Public Works provides solid-waste pickup (including recyclable items), potable water, and a sewer system with wastewater services. Electrical power is provided by Florida Power & Light and the Clay Electric Cooperative.

Medical services are provided by Azalea Health, which operates a clinic in the city. Fifteen hospitals are within 30 miles (48 km) of Hawthorne. The closest are in Gainesville: Shands Hospital, North Florida/South Georgia Veteran Affairs Health Care System, and the North Florida Regional Medical Center. To the east, Putnam Community Medical Center is available for Hawthorne residents who are closer to Palatka. Florida Hospital Ocala and Ocala Regional Medical Center are in Ocala, south of Hawthorne.

All content from Kiddle encyclopedia articles (including the article images and facts) can be freely used under Attribution-ShareAlike license, unless stated otherwise. Cite this article:
Hawthorne, Florida Facts for Kids. Kiddle Encyclopedia.