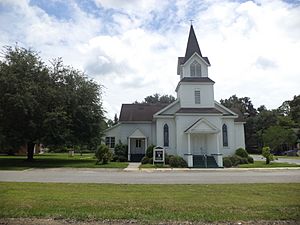 Jasper is a city in Hamilton County, Florida, United States. The population was 4,546 at the 2010 census, up from 1,780 at the 2000 census. It is the county seat of Hamilton County. The Old Hamilton County Jail and the United Methodist Church in Jasper are on the National Register of Historic Places. One of the largest industries is phosphate mining.

Set in the North Florida lowlands 83 miles west of Jacksonville, 90 miles east of Tallahassee, 35 miles south of Valdosta, Georgia, 32 miles north of Lake City, the town is situated close to supplies but far enough away to retain some independence and solitude. Jasper is topically located on a slightly higher elevated area surrounded by lowland, it is believed to rest on land originally thought to be the site of Miccosukee (Mikasukis) Indians, a sub tribe of the Seminole nation. The 1823 Treaty of Moultrie bought the Indian lands and the population was required to move southeast of the Suwannee River. This allowed settlers to move into the area. A suspected Indian burial mound is located at Baisden (named after Josiah Baisden) Swamp just on the outskirts of Jasper. Six miles north of Jasper along the Alapaha River an established Indian village called Halata-Micco (Hala-at-a-Mico) (named for Chief Billy Bowlegs of the Seminole, who may have resided there) once stood, Chief Bowlegs signed the Treaty of Paynes Landing (1832) as Hola-at-a-Mico, his x mark (aka Billy Bowlegs) establishing the type of Indian inhabiting the area where artifacts of pottery, fishing spear points, and arrowheads are often found.

Soon after the Treaty of Moultrie in 1823 was delivered, Hamilton County was established as part of the original 15 counties in Florida, allowed settlers which came mostly from Georgia and South Carolina to move into the area in earnest between 1827 through the 1840s. In 1840 inhabitants of our town were calling the settlement Pulaski; others called it Wall. Records tell us that Daniel Bell, living just outside the settlement in 1824, was County Judge in 1828, appointed under the authority of the Acting Territorial Governor McCarty in Tallahassee. In 1839 he was a member of the Territorial Legislative Council. Legend has it that Mr. Bell, also considered to be the first settler of the county, disagreed with developing names for the little township and he met with locals (one of them named Simon Whitehurst, one of the few Revolutionary War veterans in Florida, buried in Jasper) and other friends where they decided to submit the name of Jasper, in honor of Revolutionary War Veteran William Jasper, to the territorial capitol in Tallahassee. There the name was/is registered and incorporated as documented in the Territorial Legislative Journal. In 1841 the “Jasper Post Office” was established ending any discussion on names for the town. Florida became a state in 1845 and thirteen years later on March 2, 1858 it is believed that the town’s leaders thought they should finally “officially” incorporate the town of Jasper under statehood.

The early history and specific makeup of Jasper is rather vague except for scant records that survived several courthouse fires in the late 1800s. What we do know is that the original town was built about a mile south of its current location near the site of the present day Hamilton Correctional Institution. The original courthouse and a stockade stood where Evergreen Cemetery is located. The citizens fought Seminole Indian raiding parties throughout the early periods, the last Seminole War ending in 1858. In 1861 the War Between the States came to Jasper. The Jasper Blues (“I” Company 2nd Infantry CSA) was created from Jasper and county citizens. The unit rendezvoused west of Jacksonville, shipped by train to Virginia arriving on the day of The Battle of 1st Manassas, and was eventually made a part of the First Corp (Stonewall Jackson’s Corp) of The Army of Northern Virginia led by General Robert E. Lee. A school in Jasper was named in Lee’s honor and is still occupied today as the County School Board Offices. In 1865 the Savannah, Florida, and Western railway was completed and a Depot was built about a mile north of the town center. Businesses and homes migrated toward the railroad and eventually the current town was established along that line. The town grew in earnest between 1890 and 1930 with a rich trade in turpentine, tobacco, cotton, and pine lumber. Jasper reached its pinnacle in the 1920s with a booming population of over 2000. Most of Jasper’s current day buildings were built during this 40-year period. Since the 1920s Jasper has seen many economic changes. The leading cotton industry gave way to the turpentine industry, turpentine to lumber, lumber to tobacco, and finally tobacco to phosphate mining. The completion of Interstate 75 in the late 1950s has caused further decline as tourist and shipping bypass the town. In 2002 town officials extended the city limits and infrastructure to the intersection of US 129 and Interstate 75, and built infrastructure (water and sewer) with the help of county officials to the Hamilton County Industrial Park along US 41 in order to encourage economic growth and development. Since that time several new businesses have moved into the area and the new high school has been built along the route.

The first settlement used in Hamilton County was called Micco Town or more accurately Hala-at-aha Micco which is interpreted as "Chief of the Miccosukee"; therefore, it is strongly believed to have been the home of Chief Billy Bowlegs who signed the Treaty of Moultrie, 1823.

There were 742 households, out of which 28.4% had children under the age of 18 living with them, 37.7% were married couples living together, 23.5% had a female householder with no husband present, and 34.2% were non-families. 31.5% of all households were made up of individuals, and 15.0% had someone living alone who was 65 years of age or older. The average household size was 2.40 and the average family size was 3.01. 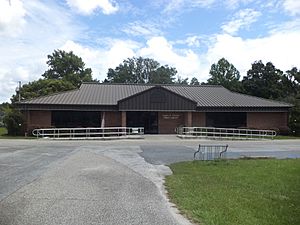 Central Hamilton Elementary School in Jasper previously served the city. It was consolidated into a new elementary school, Hamilton County Elementary School, located in an unincorporated area south of Jasper. Its opening is scheduled for August 2017.

All content from Kiddle encyclopedia articles (including the article images and facts) can be freely used under Attribution-ShareAlike license, unless stated otherwise. Cite this article:
Jasper, Florida Facts for Kids. Kiddle Encyclopedia.