Live Oak is a city in Suwannee County, Florida, United States. The city is the county seat of Suwannee County and is located east of Tallahassee. As of 2010, the population recorded by the U.S. Census Bureau was 6,850.

It is served by the Suwannee County Airport as well as many private airparks scattered throughout the county.

There is also a community named Live Oak in Washington County, Florida.

The founding of Live Oak dates back to shortly before the Civil War. Established in 1858, Live Oak was located at a junction between two strategically important railways: one operating between Jacksonville and Tallahassee, and another running south from Dupont, Georgia. A large live oak tree located off the railways was a gathering and resting spot for many of the workers on the line, and gave the new cityscape its name. The tree was formerly located where the now-present Pepe's Mexican Grocery on U.S. 90 is located. 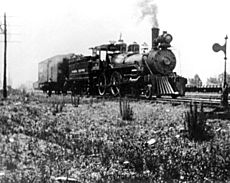 Florida Railway engine #3 at the Seaboard yards in Live Oak circa 1915.

In 1879, the state legislature founded a normal school for blacks for the training of teachers; it developed as Florida Memorial University, now based in Miami.

Geographically, Suwannee County is situated on a limestone bed riddled with underground freshwater streams, which surface in dozens of beautiful springs. This phenomenon of "Karst topography" gives the area a local supply of renewable fresh water and abundant sources of fishing. The county is known as a world-class cave diving site for SCUBA enthusiasts, and underwater cave explorer Sheck Exley chose to live here in order to have close access to many of the springs.

Live Oak receives rain, on average, 84 days per year. This makes it the city that receives the fewest days of rain per year over 0.1 inches in Florida.

All content from Kiddle encyclopedia articles (including the article images and facts) can be freely used under Attribution-ShareAlike license, unless stated otherwise. Cite this article:
Live Oak, Florida Facts for Kids. Kiddle Encyclopedia.