Belle Glade is a city in Palm Beach County, Florida, United States, on the southeastern shore of Lake Okeechobee. According to the 2010 U.S. Census, the city had a population of 17,467.

Belle Glade (and the surrounding area) is sometimes referred to as "Muck City" due to the large quantity of muck, in which sugarcane grows, found in the area. Despite being located in the South Florida region of the state, Belle Glade is culturally more associated with the Florida Heartland.

For a time during the early to mid 1980s, the city had the highest rate of AIDS infection per capita (37 cases in a population of roughly 19,000) in the United States. According to the FBI, in 2003, the city had the second highest violent crime rate in the country at 298 per 10,000 residents. In 2010, the Palm Beach County sheriff's office estimated that half of the young men in Belle Glade between the ages of 18 and 25 had felony convictions.

The existence of Belle Glade is related to the federal project of draining the land around Lake Okeechobee, the acreage to be used for agriculture. The town was built in 1925 and destroyed three years later by a hurricane which killed thousands of people. The town was subsequently rebuilt. The area around Lake Okeechobee is fertile and farming has been an important industry.

Many migrant farmworkers from Belle Glade appeared in the 1960 television documentary, Harvest of Shame.

Men and women still gather around 5 a.m. in the same lot you see at the beginning of Harvest of Shame, waiting for buses to take them to the fields. The "loading ramp," as it's called, is a bleak, empty lot, surrounded by some small buildings with bars on the windows and a boarded up storefront.

As of May 2014 the city has plans "to demolish the loading ramp and turn it into a park."

The town is known for its football tradition, and together with nearby Pahokee has "sent at least 60 players to the National Football League". 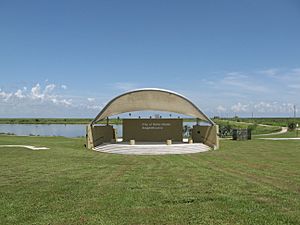 In CBS Reports' 1960 program Harvest of Shame, Belle Glade plays a prominent role as a source of migrant agricultural labor.

The final scenes of the crime novel Pretty Little Things by Jilliane Hoffman take place in a sugarcane plantation near Belle Glade.

The high school football culture of Belle Glade is the subject of the non-fiction book, Muck City: Winning and Losing in Football's Forgotten Town by author Bryan Mealer.

The psychedelic pop band of Montreal released a track titled, "Belle Glade Missionaries" on their 2013 album, Lousy with Sylvianbriar. 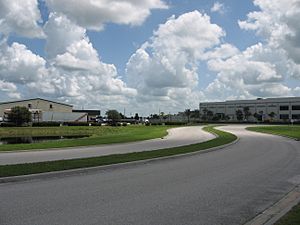 The cane sugar mill of the "Sugar Cane Growers Cooperative" (SCGC) is located at Belle Glade. During the crop season the factory employs 550 people.

The Florida Department of Corrections operated the Glades Correctional Institution in an unincorporated area in Palm Beach County near Belle Glade. It was founded in 1932, employed about 350, had a capacity of 918 inmates and was scheduled for closure in December 2011.

All content from Kiddle encyclopedia articles (including the article images and facts) can be freely used under Attribution-ShareAlike license, unless stated otherwise. Cite this article:
Belle Glade, Florida Facts for Kids. Kiddle Encyclopedia.