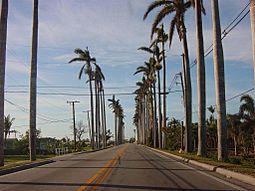 Pahokee is a city located on the shore of Lake Okeechobee in Palm Beach County, Florida, United States. The population was 5,985 at the 2000 census. As of 2007, the population recorded by the U.S. Census Bureau was 6,459. Culturally, Pahokee is associated with the Florida Heartland, although officially it is a part of South Florida.

Pahokee was incorporated in 1922. The name "Pahokee" means 'grassy waters' in the Creek language. Local residents refer to Pahokee as "The Muck", which refers to the mineral-rich dark soil in which sugar cane, citrus fruits and corn are grown by agribusinesses. It was known as the "Winter Vegetable Capital of the World" in its heyday, when the city enjoyed thriving commerce.

Pahokee in the media

American soul and gospel singer and actor Freddie Lee Peterkin was born and raised in Pahokee and now resides in London. He became an artist of particular note in the UK with the release of his album "Beyond Comprehension". He noted in a recent BBC interview that despite living in London and Europe for many years, he considers his hometown to be Pahokee.

On December 18, 2009, Damien Cave, Miami Bureau Chief of the New York Times, wrote an article describing Pahokee's economic plight and the town's hopes that a new marina project might help rejuvenate business. There has been a significant move towards regeneration with the re-opening of the Pahokee Marina Tiki Bar and Restaurant now known as 'Pahokee Mo's' and new General Dollar store. Governor Rick Scott also pledged $1.3 million towards the restoration of Pahokee's infrastructure in late 2014 [1]. This is in addition to $200,000 pledged by Senator Abruzzo in 2014 [2]. Colin Walkes has been Mayor of Pahokee since 2013 [3]. He succeeded the previous four-term Mayor J.P. Sasser.

Pahokee has received significant attention because of nearby Miracle Village, a migrant worker facility converted into housing for registered sex offenders.

According to the United States Census Bureau, the city has a total area of 5.4 square miles (14 km2), all land.

There were 1,710 households out of which 44.0% had children under the age of 18 living with them, 46.3% were married couples living together, 22.8% had a female householder with no husband present, and 22.3% were non-families. 18.8% of all households were made up of individuals and 6.4% had someone living alone who was 65 years of age or older. The average household size was 3.35 and the average family size was 3.79.

All content from Kiddle encyclopedia articles (including the article images and facts) can be freely used under Attribution-ShareAlike license, unless stated otherwise. Cite this article:
Pahokee, Florida Facts for Kids. Kiddle Encyclopedia.