Sebastian is a city in Indian River County, Florida, United States at the confluence of the Saint Sebastian River and the Indian River. It is two miles away from the Atlantic Ocean. It is the largest city in Indian River County and the biggest population center between Palm Bay, Florida and Fort Pierce, Florida. The city’s economy is heavily reliant on tourism. It is close to the Pelican Island National Wildlife Refuge and Sebastian Inlet State Park. In 2010, the population recorded by the U.S. Census Bureau was 21,929.

Sebastian is a principal city of the Sebastian−Vero Beach Metropolitan Statistical Area, which includes all of Indian River County.

In 1715, several Spanish ships loaded with treasure (known as the 1715 Treasure Fleet) encountered a storm off the shores of the Treasure Coast and were lost. It is estimated that only a portion of the sunken treasure has been found. The value placed on the treasure lost from the 1715 fleet has been estimated at over $500 million USD.

The town of Sebastian was a fishing village as early as the 1870s. In the early 1880s David Peter Gibson, and Thomas New settled in the area. New filed to start a post office under the name New Haven. However, New got into legal trouble for misuse of his position as postmaster and was removed. Sebastian was officially founded in 1882 and named St. Sebastian, after Saint Sebastian. Later, “St.” was removed from the name of the town, but not from the river. Sebastian was incorporated as a city in 1923. Nearby Pelican Island was declared the United States’ first National Wildlife refuge in 1903. 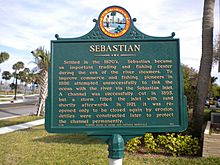 21.5% of households had children under the age of 16 living with them, 54.1% were married couples living together, 10.1% had a female householder with no husband present. 32.00% consisted of non-traditional families or unrelated individuals. 25.2% of all households were made up of individuals, and 3.9% had someone living alone who was 85 years of age or older. The average household size was 2.30 and the average family size was 2.75.

The GoLine Bus system operates the #9, #10, #11, and #12 buses out of the North County Transit Hub at 90th Avenue & Sebastian Blvd to various parts of Indian River County.

Located to the west of the city center on County Road 512, the North County Public Library is part of the Indian River County Library System.

All content from Kiddle encyclopedia articles (including the article images and facts) can be freely used under Attribution-ShareAlike license, unless stated otherwise. Cite this article:
Sebastian, Florida Facts for Kids. Kiddle Encyclopedia.