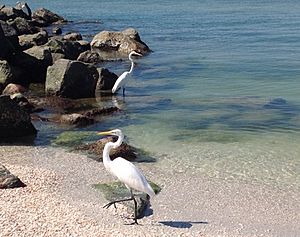 Treasure Island is a city in Pinellas County, Florida, United States. It is situated on a barrier island in the Gulf of Mexico.

The area of Treasure Island was originally settled in small communities by the Tocobaga around 300 CE. The Timucua traded with other Native American tribes in the area until the arrival of Pánfilo de Narváez in 1528. De Narváez decimated the indigenous people before leaving the area in search of gold.

Treasure Island got its name early in the 20th century, after several property owners attempted to boost sales of the properties being developed on the island by first burying and then pretending to discover a couple of wooden chests on the beach around 1915. After claiming the chests were filled with treasure, the news of the discovery quickly spread and people began calling the island Treasure Island.

With an elevation of only three feet, the Great Gale of 1848 carved out John's Pass on the island's north end and split off two smaller islands, called the Isle of Palms and Isle of Capri.

Treasure Island saw a surge in residential and hotel construction following World War II through the 1950s. The real estate used in these ventures often consisted of fill from dredged material; that is, artificial extensions of the land were created, which were usually designed for convenient access to navigable waterways.

Legendary baseball slugger Babe Ruth had a winter beachfront home on Treasure Island after his retirement.

Treasure Island today has a thriving bar and restaurant scene in its downtown.

All content from Kiddle encyclopedia articles (including the article images and facts) can be freely used under Attribution-ShareAlike license, unless stated otherwise. Cite this article:
Treasure Island, Florida Facts for Kids. Kiddle Encyclopedia.