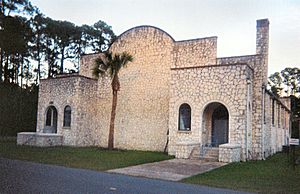 Sopchoppy is a city in Wakulla County, Florida, United States. It is part of the Tallahassee, Florida Metropolitan Statistical Area. The population was 457 at the 2010 census. As of 2018, the population was estimated by the U.S. Census Bureau to be 482. Ochlockonee River State Park is nearby.

According to the United States Census Bureau, the city has a total area of 1.5 square miles (3.9 km².), all land.

The town's name is a corruption of "Lockchoppe", derived from the Muskogee lokchapi (lokcha (acorn) / api (stem)), which was the old name of the nearby river.

Sopchoppy came into existence in 1894. After the CT&G Railroad Company had built a railway through the area, it platted the town on property it already owned in the area, across the river from Greenough. To encourage people to settle there, the railroad engaged in a significant advertising campaign, exaggerating the quality of the soil and climate.

The town is home to the annual Worm Grunting Festival, a town celebration named in honor of a worm grunting — also known as worm charming — a method for driving worms to the surface of the earth. Worm charmers hammer wooden stakes into the ground, then rub them with metal slabs. The resulting vibrations cause worms to surface, whereupon they are typically gathered and used or sold for fishing bait.

Sopchoppy is one of the settings and worm grunting a plot element in the 2017 novel Clownfish Blues by Tim Dorsey.

There were 178 households, out of which 32.0% had children under the age of 18 living with them, 43.8% were married couples living together, 15.2% had a female householder with no husband present, and 37.6% were non-families. 32.6% of all households were made up of individuals, and 11.2% had someone living alone who was 65 years of age or older. The average household size was 2.39 and the average family size was 3.09.

All content from Kiddle encyclopedia articles (including the article images and facts) can be freely used under Attribution-ShareAlike license, unless stated otherwise. Cite this article:
Sopchoppy, Florida Facts for Kids. Kiddle Encyclopedia.