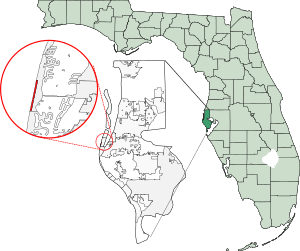 Belleair Shore is a town in Pinellas County, Florida, United States. As of the 2010 census, it had a population of 109.

One of Florida's smallest and thinnest incorporated towns, Belleair Shore is located entirely on the west side of Gulf Boulevard, bounded by the Gulf to the west, Belleair Beach to the north and east, and Indian Rocks Beach to the south.

The census of 2000 incorrectly reported that the population of this city was 0. The 2010 Census reported 109 residents.

All content from Kiddle encyclopedia articles (including the article images and facts) can be freely used under Attribution-ShareAlike license, unless stated otherwise. Cite this article:
Belleair Shore, Florida Facts for Kids. Kiddle Encyclopedia.