Clewiston is a city in Hendry County, Florida, United States. The population was 6,460 at the 2000 census. According to the US Census estimates of 2005, the city had a population of 7,173. Clewiston is home to the Ah-Tah-Thi-Ki Museum and the Clewiston Museum. 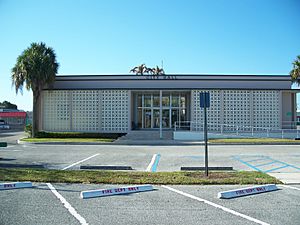 The area beside Lake Okeechobee was once used as a fishing camp by the Seminole Indians. The first permanent settlement began in 1920, when John O'Brien of Philadelphia and Alonzo Clewis of Tampa purchased a large tract of land to establish a town. They commissioned a town plan and built the Moore Haven & Clewiston Railroad to connect the community to the Atlantic Coast Line Railroad at Moore Haven. Incorporated as a city in 1925, Clewiston would become noted for its sport fishing, particularly of largemouth bass.

Large sugar plantations were established around Lake Okeechobee. By the 1950s and 1960s, the cultivation of citrus, vegetables and cattle were also important to the economy. US Sugar Corporation, however, remained the dominant manufacturer in Clewiston, which became known as "America's Sweetest Town." On June 24, 2008, Governor Charlie Crist announced that the State of Florida had arranged to buy for $1.75 billion the company's 187,000 acres (76,000 ha), including the refinery in Clewiston. On November 11, the plan was scaled back to $1.34 billion for 181,000 acres (73,000 ha) of farmland, no longer including the mill, citrus processing facilities and other assets. This would allow the company to remain in business and leave open the possibility of preserving its 1,700 jobs. Over the next seven crop cycles, the farmland would be leased back from the state to US Sugar for $60 million. It would then be converted into reservoirs and water-filtering areas as part of the ongoing restoration of the Everglades ecosystem.

There were 2,174 households out of which 39.5% had children under the age of 18 living with them, 55.9% were married couples living together, 12.5% had a female householder with no husband present, and 24.9% were non-families. 18.9% of all households were made up of individuals and 7.2% had someone living alone who was 65 years of age or older. The average household size was 2.93 and the average family size was 3.32.

The Hendry County Library Cooperative in Florida includes the Clewiston Library, Barron Library (located in LaBelle, the county seat) and the Harlem Library.

All three libraries provide Hendry County residents with materials and general information, and each library has a secondary individualized area of focus. The Clewiston Library has a Florida room to house historical reference material and books pertinent to local and state history. The Harlem Community Library is located in a former school building which also houses the Harlem Academy daycare center and its specialty is a growing African American collection. The Barron Library collects genealogical materials.

The Clewiston Library also recently sought and received an LSTA grant to digitize their local newspaper, The Clewiston News and have the digital versions added to the free, open access Florida Digital Newspaper Library.

All content from Kiddle encyclopedia articles (including the article images and facts) can be freely used under Attribution-ShareAlike license, unless stated otherwise. Cite this article:
Clewiston, Florida Facts for Kids. Kiddle Encyclopedia.