Wellington is a village just west of West Palm Beach in Palm Beach County, Florida, United States. As of 2014, the city had a population of 61,485 according to the U.S. Census Bureau, making it the most populous village in the state. It is the fifth largest municipality in Palm Beach County by population. Wellington is part of the South Florida Metropolitan Statistical Area. Wellington was named Money Magazine's "Top 100" Best Places to Live in 2010. Although Wellington is not a village under any standard definition of the term village in the US, it is referred to officially as the "Village of Wellington".

Wellington was originally the world's largest strawberry patch on land called the Flying Cow Ranch; "Flying" because the founder was an aviator, and "Cow" stood for the initials for Charles Oliver Wellington (C.O.W.). In the 1950s, Mr. Wellington bought 18,000 acres (73 km2) of central Palm Beach County swampland, which would eventually become the Village of Wellington. Wellington began as a planned unit development approved by Palm Beach County in 1972, and up until 1990, it functioned as a sprawling bedroom community with few shopping centers or restaurants until it was incorporated in December 1995. It has now become known as an international center for equestrian sports.

As of 2000, Wellington had the eighty-fifth highest percentage of Cuban residents in the US, with 3.27% of the village's population.

The Village of Wellington has the following parks:

Beach activities are around a half hour's drive time, due east, to the Palm Beaches. For variety, from Wellington one can access Fort Lauderdale less than one hour away or travel to South Beach approximately a one and half hour's drive. 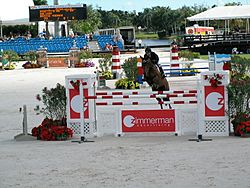 Wellington is host to the Winter Equestrian Festival, the largest and longest running horse show in the world from January to April. It holds more than forty weeks of equestrian competitions per year. A new expansion includes the Global Dressage Festival. International competitors attend the equestrian events and social event held in the community. 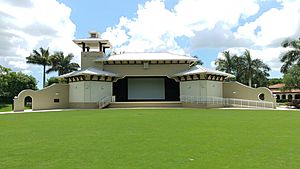 The Wellington Amphitheater hosts events like free movie night, musical and comedy performances, the Food Truck Invasion and many more.

Wellington has two regional malls The Mall at Wellington Green, and the Old Wellington Mall along with a many other nationally known retailers located in outdoor shopping venues along the major commercial highways.

There are a number of entertainment and cultural venues such as the Kravis Center for the Performing Arts and the Norton Museum of Art in nearby West Palm Beach.

Wellington is serviced by a few different mainstream news publications.

All content from Kiddle encyclopedia articles (including the article images and facts) can be freely used under Attribution-ShareAlike license, unless stated otherwise. Cite this article:
Wellington, Florida Facts for Kids. Kiddle Encyclopedia.