San Antonio, or unofficially San Ann as the locals call it, is a city in Pasco County, Florida, United States. It is a suburban city included in the Tampa-St. Petersburg-Clearwater, Florida Metropolitan Statistical Area. It lies within Florida's 12th congressional district. The population was 1,138 at the 2010 census. It was established as a Catholic colony by Judge Edmund F. Dunne. The city derives its name from Saint Anthony of Padua. Saint Leo University is located nearby.

According to the United States Census Bureau, the village has a total area of 1.2 square miles (3.1 km2), all land. 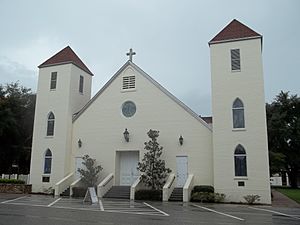 San Antonio was founded (in name only) in 1881 by Edmund F. Dunne who previously had been chief justice of the Arizona territory. Dunne was a legal counsel involved in the Disston Land Purchase, and as his commission, received 100,000 choice acres (400 km2) of land out of the 4,000,000 acre (16,000 km²) purchase. The following year on February 15, while surveying the Disston Purchase with his cousin, Captain Hugh Dunne, Judge Dunne selected the city's location and began settling it. He established the city as the center of a Catholic colony in Florida. Dunne planned several other villages for the surrounding area including Saint Joseph, Saint Thomas, Villa Maria, Carmel and San Felipe, but only the rural community of Saint Joseph survives today. In 1889 the Benedictines established the monastery of St. Leo and St. Leo College on Dunne's former homestead and farm land, later incorporating the area as part of a separate town, St. Leo, Florida. At about the same time, five Benedictine sisters established Holy Name Convent in the center of San Antonio. The nuns had come to teach at two local schools (St. Anthony School and St. Joseph School), as well as to establish Holy Name Academy. The sisters had the convent and the academy physically moved by oxen to a 40-acre parcel in St. Leo overlooking the southwestern shore of Lake Jovita in 1911. The nuns remained at St. Anthony School until the end of the 2009-10 academic year. At the time of its founding San Antonio was located in the southern third of Hernando County, as Pasco County was not created until 1887. The Orange Belt Railway first began service to San Antonio in November 1887. For a short time in the 1920s San Antonio officially changed its name to the town of Lake Jovita, only to revert before the end of the decade.

There were 270 households, out of which 33.7% had children under the age of 18 living with them, 54.8% were married couples living together, 10.7% had a female householder with no husband present, and 33.3% were non-families. 29.3% of all households were made up of individuals, and 7.4% had someone living alone who was 65 years of age or older. The average household size was 2.43 and the average family size was 3.03. 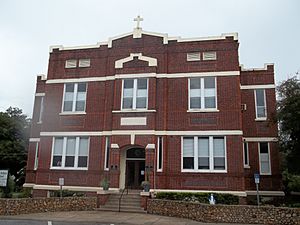 San Antonio is home to two schools. Saint Anthony Catholic School (grades K–8) traces its roots to the Fall of 1883 when local widow Cecilia Morse began teaching colony children in her home. By April 1884 it was officially established as a Catholic school and is by far the oldest school of any kind in Pasco County. In fact it actually predates the county by several years. San Antonio Elementary (grades K–5) was founded 98 years later in 1981 and though its campus lies entirely within San Antonio's city limits, its mailing address is actually Dade City, Florida. Holy Name Academy (grades 1–12) was established in 1889 as an "all-girls" boarding school by the Benedictine Sisters of Florida, but moved to the neighboring town of St. Leo in 1911.

All content from Kiddle encyclopedia articles (including the article images and facts) can be freely used under Attribution-ShareAlike license, unless stated otherwise. Cite this article:
San Antonio, Florida Facts for Kids. Kiddle Encyclopedia.