Destin is a city located in Okaloosa County, Florida. It is a principal city of the Crestview–Fort Walton Beach–Destin, Florida, metropolitan area.

Located on Florida's Emerald Coast, Destin is known for its white beaches and emerald green waters. Originating as a small fishing village, it is now a popular tourist destination. According to the Florida Department of Environmental Protection, over 80 percent of the Emerald Coast's 4.5 million visitors each year visit Destin. The city styles itself "The World's Luckiest Fishing Village", and claims to have the largest fishing vessel fleet in the state of Florida.

The city is located on a peninsula separating the Gulf of Mexico from Choctawhatchee Bay. The peninsula was originally a barrier island. Hurricanes and sea level changes gradually connected it to the mainland. In the 1940s, it technically became an island again with the completion of the Choctawhatchee-West Bay Canal.

Agriculture was eventually introduced, and there are still signs of this early inhabitation in the area. Members of the Fort Walton Culture built a ceremonial mound in Fort Walton Beach.

Destin is named after Leonard Destin, a New London, Connecticut fishing captain who settled in the area between 1845 and 1850. He built a New England colonial home at the location of the Moreno Point military reservation. Captain Destin and his descendants fished the area for decades.

Condominiums were first built in Destin during the 1970s, although Destin was not incorporated as a municipality until 1984. The city has experienced rapid growth since the 1980s.

The city is located on a peninsula separating the Gulf of Mexico from Choctawhatchee Bay. The peninsula was originally an island; hurricanes and sea level changes gradually connected the island to the mainland.

Destin is near several other cities in the region. The city of Fort Walton Beach is located to the west at the inlet of Santa Rosa Sound into Choctawhatchee Bay. North of Destin, across the bay is Niceville, with the Mid-Bay Bridge linking the two by road. Panama City (to the east) and Pensacola (to the west) are each about 50 miles (80 km) away.

At the western tip of the peninsula is East Pass (also known as Destin Pass), separating it from Santa Rosa Island to the west. East Pass is the only outlet of Choctawhatchee Bay into the Gulf of Mexico, Many sources claim that the current pass was dug by hand with an inrush of water widening it within hours. The early pass appears (at the East end of Destin Harbor) in early maps and surveys from Spanish, French, and English surveyors, such as Thomas Jefferys's 1775 map The Coast of West Florida and Louisiana. Frequent dredging is required to keep East Pass navigable.

"Crab Island," was actually two islands made from sand that the Army Corps of Engineers dredged up from the East Pass. These islands were large enough to inhabit sea grass, small shrubs and nesting seabirds. It has been reduced to a significant sandbar, which appears only when the tide is out. It has become a popular anchorage in the area. The entrance to Destin Harbor, a lagoon between the beaches and the main body of the western portion of the peninsula, is located just north of the East Pass jetty. The lagoon is formed by a sand spit named Holiday Isle; many condominiums have been built along the harbor since the 1970s.

24.8% of households had children under the age of 18 living with them, 53.0% were married couples living together, 8.0% had a female householder with no husband present, and 35.7% were non-families. 27.4% of all households were made up of individuals, and 8.5% had someone living alone who was 65 years of age or older. The average household size was 2.26 and the average family size was 2.72. 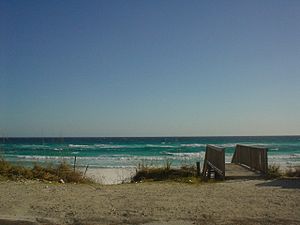 An image of a Destin beach, showing the emerald green waters typical of the Emerald Coast

The white beaches and emerald waters of the Destin area draw many tourists. Florida's Department of Environmental Protection estimates that more than 80 percent of the Emerald Coast's 4.5 million yearly visitors travel to the region to visit Destin. Visitors can charter fishing vessels from the harbor, and there are 12 beach access points in the city. Among the access points is Henderson Beach State Recreation Area. A portion of the Gulf Islands National Seashore, the Okaloosa Day Use Area, is just across East Pass on Santa Rosa Island.

The sand on Destin's beaches is some of the whitest in the world. The sand comes from the Appalachian Mountains, and is made of finely ground quartz crystal giving the appearance of sugar. Residue flows down the Apalachicola River and is deposited into the Gulf of Mexico. Because of the currents the sand drifts west along the Gulf Coast and settles from east of Panama City to the Alabama coast.

Several events also take place throughout the year as well. For the month of October, the annual Destin Fishing Rodeo draws anglers to Destin each year since 1948. Also in the month of October is the Destin Seafood Festival, where fresh seafood and local artists gather for one weekend every October.

In addition to an assortment of hotels and motels, many high-rise condominiums are located in Destin. The first condominiums in Destin were built in the 1970s, and construction continues today. Visitors play a large part in Destin's economy – the city's population of around 12,000 balloons to 40,000 during the tourist season.

Destin's surroundings include other popular tourist destinations. Sandestin, Florida, located to the east in Walton County, is a popular golf and beach resort. Further east along the coast are the master-planned community of Seaside, filming location of the 1998 movie The Truman Show; Grayton Beach, Florida; and Rosemary Beach, Florida. To the west are Navarre Beach and Pensacola Beach, and the Civil War fortification Fort Pickens is located at the western end of Santa Rosa Island. Many celebrities own homes in the area.

All content from Kiddle encyclopedia articles (including the article images and facts) can be freely used under Attribution-ShareAlike license, unless stated otherwise. Cite this article:
Destin, Florida Facts for Kids. Kiddle Encyclopedia.