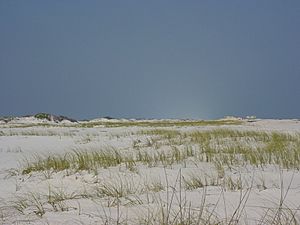 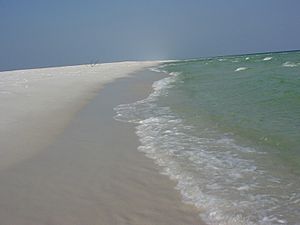 The Gulf of Mexico: the shining light in the back is from the sun's light being reflected off windblown particles of white sand from the beach.

Santa Rosa Island is a 40-mile (64 km) barrier island located in the U.S. state of Florida, thirty miles (50 km) east of the Alabama state border. The communities of Pensacola Beach, Navarre Beach, and Okaloosa Island are located on the island. On the northern side of the island, are Pensacola Bay on the west (see map) and Choctawhatchee Bay on the east, joined through Santa Rosa Sound.

Santa Rosa Island has weathered numerous hurricanes and other tropical cyclones, including the hurricane of September 1559, Hurricane Erin and Hurricane Opal (both in 1995), Hurricane Ivan (2004), Hurricane Dennis (2005), Tropical Storm Claudette (2009), and the remnants of Hurricane Ida (2009).

Parts of the island are protected from development within the Gulf Islands National Seashore.

Santa Rosa Island was explored by Spanish Conquistadors circa 1519. Years later, an expedition led by Tristan de Luna arrived from Vera Cruz (of New Spain) in August 1559 to found a settlement. Spanish settlements in the area were abandoned in 1561, following damage from storms, lack of supplies resulting in famine, and conflicts with the Pensacola natives. The Spanish settlement of St. Augustine, Florida on the Atlantic coast, established on August 28, 1565, has been continuously inhabited since then.

During the American Civil War, the Battle of Santa Rosa Island took place here on October 9, 1861. Confederate Richard Anderson crossed from the Florida mainland onto Santa Rosa Island with 1200 men, in two small steamers, in a failed attempt to capture Fort Pickens (located on the west end of the island). The Union held the fort throughout the war.

Considering Fort Pickens to be outdated, the U.S. War Department sold Santa Rosa Island in 1929 to Escambia County, Florida, for US$10,000. Ten years later, the county returned the island to the federal government in the expectation that it would be developed as a U.S. National Monument preserving the remnants of Fort Pickens. The fort and other areas are now preserved within the Gulf Islands National Seashore.

On July 8, 1950 the federal government conveyed an 875-acre (3.54 km2) parcel of Santa Rosa Island with 3 miles (4.8 km) of Gulf frontage to Okaloosa County. The county paid the federal government $4,000 to complete the transaction, which was supported by Congressman Bob Sikes. The portion of Santa Rosa Island transferred is now known as Okaloosa Island. The twelve-mile (19 km) long beach road onto U.S. Air Force property, west of the Okaloosa Island portion of Santa Rosa Boulevard, was unguarded and accessible into the 1980s, but heightened security concerns have since led to it being guarded or blocked at all times. Various military missile launch and test facilities exist on Santa Rosa Island south and southwest of Hurlburt Field.

The island has been hit by many tropical cyclones; in 1995 it was the landfall point of hurricanes Erin and Opal. Hurricane Dennis hit the island in July 2005, and with 120 mph (190 km/h) winds, was the strongest storm to do so. Tropical Storm Claudette hit in 2009.

In 2008-2009, a sunken Spanish ship was located and excavated offshore. These findings confirmed reports of the 1559 expedition by Tristan de Luna, which had established a settlement at Pensacola.

One of the final missions in the Florida Phase of the US Army's Ranger School is conducted on Santa Rosa Island.

All content from Kiddle encyclopedia articles (including the article images and facts) can be freely used under Attribution-ShareAlike license, unless stated otherwise. Cite this article:
Santa Rosa Island (Florida) Facts for Kids. Kiddle Encyclopedia.