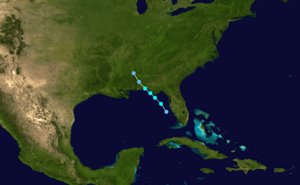 Tropical Storm Claudette was the third named storm of the 2009 Atlantic hurricane season. It was also the first tropical cyclone to affect the United States during 2009. The storm formed on August 16, and it quickly gained strength. The storm struck Santa Rosa Island, Florida, moved northwest, and dissipated over Alabama.

On August 16, Claudette dropped rainfall in parts of the Florida Panhandle. The storm spawned a tornado near Cape Coral. The tornado slammed a car into the side of a home. One person drowned in high waves along the coast of Panama City.

All content from Kiddle encyclopedia articles (including the article images and facts) can be freely used under Attribution-ShareAlike license, unless stated otherwise. Cite this article:
Tropical Storm Claudette (2009) Facts for Kids. Kiddle Encyclopedia.