Kids Encyclopedia Facts
This page is about the mainland community of Navarre. For the nearby beach community, see Navarre Beach, Florida.

Navarre is an unincorporated community in Santa Rosa County in the northwest Florida Panhandle. It is a bedroom community for mostly U.S. Military personnel, Federal Civil Servants, local population, retirees and defense contractors. Due to its proximity to Navarre Beach and its four miles of beach front on the Gulf of Mexico as well as the Gulf Islands National Seashore, it has a small, but growing community of nature enthusiasts and tourists.

Navarre is about 25 miles east of Pensacola and about 15 miles west of Fort Walton Beach. The community is roughly centered on the junction of U.S. Route 98 and State Road 87. It is part of the Pensacola–Ferry Pass–Brent Metropolitan Statistical Area and is known for the untarnished natural beauty, swimming in the emerald colored water, having a picnic on the beach or in the county park which is located directly on the Gulf of Mexico. Residents and visitors alike enjoy riding or jogging on the several scenic bike paths.

In 1693, Spanish explorers Carlos de Sigüenza y Góngora and Admiral Andrés de Pez y Malzarraga, set sail from Veracruz, Mexico. A skilled cartographer, scientist, mathematician and theologian, Sigüenza was responsible for scouting and mapping possible sites of Spanish colonization in Northwest Florida during the expedition. While traveling in the area of East Bay in April 1693, the Spanish discovered what is today called the East Bay River. In honor of Captain Jordan de Reina, an officer who had taken part in the Barroto-Romero voyage of 1686 as well as Sigüenza's in 1693, the Spanish dubbed the waters on which they traveled, "The River Jordan". On April 11, 1693, while sailing up East Bay River, sailors aboard the Spanish ships noticed a group of Native Americans observing them from a camp near the shore. In order to greet the natives, a landing party was sent out. By the time the Spanish reached the shore however, the Native Americans were gone. At the natives quickly abandoned camp, the Spanish discovered half-cooked pieces of buffalo meat sitting over a fire, along with a fierce dog guarding the site. Due to the great number of oak trees in that place, the campsite was called “El Robledal”, meaning "The Oakgrove" in Spanish. After erecting a wooden cross and leaving gifts for the natives, the Spaniards continued their exploration upriver. Upon later return to El Robledal, the explorers noticed that their gifts had been taken. In return, the natives had also constructed a wooden cross and left a buffalo hide as a peace offering. The earliest-known map of Robledal dates from 1693, the same year as the Pez-Sigüenza Expedition. Three years later, in a 1698 map by Don Andrés de Arriola y Guzmán (the first governor of a settlement in the Pensacola area after the Tristán de Luna y Arellano colony was abandoned), Robledal is again noted.

Approximately 41 years before Guy H. Wyman platted Navarre, a small settlement named Eagan arose in 1884. The settlement, composed of 40 families, was located off the Santa Rosa Sound and encompassed a portion of present-day Navarre. The settlement, which formerly existed as a post office location, was named after its first postmaster, John Eagan Esq., a famous Pensacola lawyer and politician. Following the post office’s discontinuation on September 11, 1884, families continued to live in the area, and the town continued to appear on area maps even into the 1890s. While what became of the town and the people who lived there at that time is unknown, the discovery of the town's existence definitively established settlement of the Navarre area in South Santa Rosa County as being prior to the 20th century. The land upon which Eagan existed would, in fact, later become what is now known as Navarre.

The founder of Navarre was Guy Wyman, a colonel in the United States Army. During World War I, he met a French nurse named Noelle. At the time, immigration policies would not allow him to bring her to the United States as a fiancée or even as a wife, but he could bring her back as his legal child. Col. Wyman therefore adopted her, and brought her back to the Florida panhandle, where he purchased a large amount of land. Noelle named their holdings Navarre, after the province in Spain, near France. Wyman platted the town in 1925, but made no steps towards development. However, during the Great Depression, the Wymans could not pay the taxes on it, and were forced to begin selling it off. Part of that property is where the Navarre Park is today. While protecting and enhancing the natural beauty of the area; several steps have been taken to develop luxury accommodations, water activities, boutique shopping, scenic trails, top rated schools and nature/educational opportunities.

On March 10, 2015, a UH-60 from Eglin Air Force Base crashed in the Santa Rosa Sound off the coast of the community of Navarre. All eleven on board were believed killed. On November 18, 2016 Leadership Santa Rosa Class 29 unveiled the Navarre Black Hawk Memorial in Navarre Park. The memorial was built to honor the men who died in the Black Hawk crash and anyone who has paid the ultimate sacrifice in service to the United States.

Navarre is on roughly 12 miles of shoreline.

According to different estimates the population ranges from 40,000 to 42,200 residents living in the unincorporated area of Navarre. The below racial characteristics of the community are from 2013 estimates.

If the town of Navarre was to be incorporated it would be the largest city between Pensacola and Tallahassee (based on population). 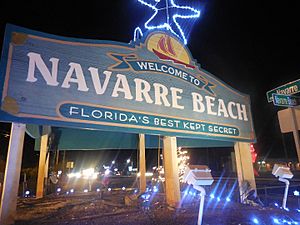 The welcome to Navarre Beach sign with Christmas decorations. 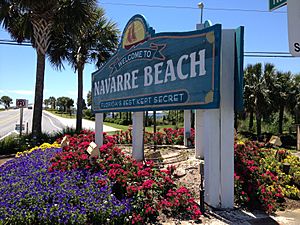 Navarre is centered near the junction of U.S. Highway 98, the primary east-west route between Pensacola and the Fort Walton Beach area, and State Road 87. It is located near several large military facilities: Naval Air Station Pensacola to the west; Hurlburt Field and Eglin Air Force Base to the east; and Naval Air Station Whiting Field to the North.

Tourism has increased in the Navarre area since 2010, being declared "Florida's Best Kept Secret" by the local hospitality business. Navarre has a park on the mainland next to Navarre Beach bridge and the Intracoastal Waterway that contains a Visitor Information Center; water splash pad, duck pond, butterfly house, playground, gazebos; pier and small beach area. Boating, Surfing, jet skiing, paddle boarding, fishing, bird watching, exploring scenic trails and walking/jogging are popular among the residents and visitors. Navarre's fourth hotel, the first beachfront hotel to operate since 2004, a Springhill Suites will be completed and opened sometime in early 2017.

In 2010 the Navarre Beach fishing pier was rebuilt after repeated damage from hurricanes. At 1,545-feet, it is currently the longest fishing pier on the Gulf of Mexico and in the state of Florida.

As a low-elevation community near the Gulf of Mexico, Navarre is often threatened by hurricanes. Significant damage was incurred as a result of Hurricanes Erin, Opal, Ivan and Dennis. Many homes and businesses immediately along Santa Rosa Sound (generally south of U.S. Highway 98) suffered storm surge as a result of those storms. Recoveries have been rendered by the area with the population quickly flourishing. This area of Florida is consistently listed as one of the worst places for hurricanes. 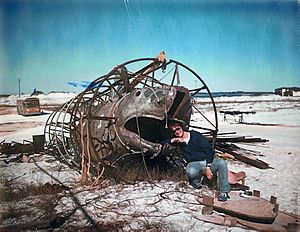 A clean-up of old props from Jaws 2 on Navarre Beach.

A large portion of the scenes in Jaws 2 were filmed off the coast of Navarre and Navarre Beach circa 1977. The production "was a boost to the local economy because local boaters, extras and stand-ins or doubles were hired. Universal brought in actors, directors, producers and their wives, camera and crew people who needed housing, food and clothing for the movie. Services were needed for laundry, dry-cleaning and recreation." Navarre's Holiday Inn "Holidome" was used as the film's headquarters, with the ground floor converted into production offices, and some of the Gulf-front suites remodelled for David Brown and Roy Scheider. Universal rented 100 of the hotel's 200 rooms, spending $1 million. The Holiday Inn was destroyed in the 2004 Atlantic hurricane season. A new Springhill Suites is being built on the same site as the Holiday Inn and will be completed sometime during March 2017.

All content from Kiddle encyclopedia articles (including the article images and facts) can be freely used under Attribution-ShareAlike license, unless stated otherwise. Cite this article:
Navarre, Florida Facts for Kids. Kiddle Encyclopedia.