Jaws 2 is a 1978 film, the first sequel to Jaws. It is set four years after the events of the original film. Its famous tagline is: "Just when you thought it was safe to go back in the water..."

It is the first sequel to Steven Spielberg's Jaws (1975). It was released in 1978. It is the second in the Jaws series of movies. These are based on Peter Benchley's Jaws novel of the same name. Directed by Jeannot Szwarc, Jaws 2 stars Roy Scheider as Police Chief Martin Brody. He has to deal with another great white shark terrorizing the waters of Amity Island, a fictional seaside resort. Jaws 2 was followed by Jaws 3-D (1983) and Jaws: The Revenge (released in 1987). 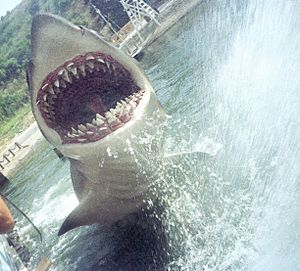 Although the film was initially met with mixed reviews, many revisionist critics have since experienced a newfound appreciation for the film following its successful release on DVD. Many people agree that John Williams' score is more complex than the original. The film was the highest-grossing sequel in history in 1978 and an all-time top 25 box office champ for more than two decades. Jaws 2 instituted the now common practice of sequels as a film franchise.

All content from Kiddle encyclopedia articles (including the article images and facts) can be freely used under Attribution-ShareAlike license, unless stated otherwise. Cite this article:
Jaws 2 Facts for Kids. Kiddle Encyclopedia.