Chief of police facts for kids 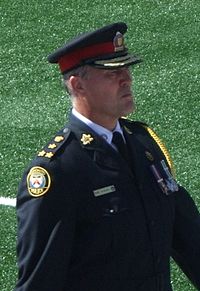 A chief of police (also known as police chief or chief) is the title typically given to the top official in a police department, particularly in North America. Other titles for this position include Commissioner, Superintendent, and Chief Constable. A Chief of Police is usually a municipal employee of a city or town. In contrast, a U.S. Sheriff is generally elected by the voters of a county. Some states have both an appointed and an elected Chief of Police (Louisiana). The fraternal organization International Association of Chiefs of Police (IACP) is an organization often associated with many Chiefs of Police.

Chief police officer is a phrase used in the United Kingdom to describe the position of the most senior police officer in a police force. It refers to the 53 Chief Constables, the Commissioner of the City of London Police or the Commissioner of the Metropolitan Police. They are members of the Association of Chief Police Officers. The phrase is used in legislation on the power to permit public processions, or grant firearms licenses. Many routine activities are delegated to constables.

No police officers in the UK are elected. There is a mixed system of control by local and central government, and local committees act in advice and supervision. Various organisations are permitted to hire and control their own security forces: the armed forces, the railways, certain branches of the security services, and a number of private organisations.

Policing in Canada is usually the responsibility of the province. Usually police chiefs run the police departments. In eight of Canada's ten provinces the Royal Canadian Mounted Police act as regional police. They also act as the municipal police in the three territories and in many towns in British Columbia. In the province of Ontario, a Chief of Police must be a sworn police officer.

Chiefs of police in the United States have two unique opportunities for training for the position. The FBI offers executive police training at their academy. The University of Louisville has the Southern Police Institute. Police chiefs of larger cities often work for a police commissioner. In those cases the chief of police manages the day-to-day business of the police department. The chief may also work for a board of commissioners. 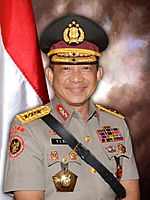 In Ghana, Kenya and Nigeria, the chief of police is a Cabinet minister position. In many parts of the world Interpol has taken a role in organizing regional councils of police chiefs. They work in close cooperation with police chiefs to exchange methods and ideas. Many councils take these ideas directly to their governments which often put them into effect. Regional and sub-regional chiefs of police councils are set up in most parts of Asia, Africa and Europe. North and South American have functioning councils that work with Interpol. Central American councils are a work in progress.

All content from Kiddle encyclopedia articles (including the article images and facts) can be freely used under Attribution-ShareAlike license, unless stated otherwise. Cite this article:
Chief of police Facts for Kids. Kiddle Encyclopedia.