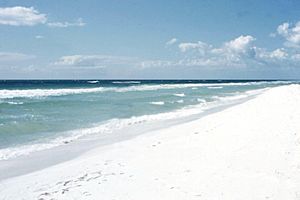 The sand color is exceptionally white, as seen in this 1957 photo.

Pensacola Beach is an unincorporated community located on Santa Rosa Island, a barrier island, in Escambia County, Florida, United States. It is situated south of Pensacola (and Gulf Breeze connected via bridges spanning to the Fairpoint Peninsula and then to the island) in the Gulf of Mexico. As of the 2000 census, the community had a total population of 2,738. It has been described as "famous" for its ultra-white sand beaches.

Pensacola Beach occupies land bound by a 1947 deed from the United States Department of Interior that it be administered in the public interest by the county or leased, but never "disposed"; its businesses and residents are thus long-term leaseholders and not property owners.

Pensacola Beach is part of the Pensacola–Ferry Pass–Brent Metropolitan Statistical Area, which includes all of Escambia and Santa Rosa counties.

under Conquistador Hernando de Soto, visited the area during the early Spanish exploration of North America. He anchored in Pensacola Bay for the winter of 1539–1540.

In 1559, Don Tristan de Luna y Arellano led the first settlement of the region. His 11 ships, with 1500 settlers, anchored in the bay and established its colony on the site of today's Naval Air Station Pensacola. A hurricane decimated the colony a few weeks later, killing hundreds and sinking 5 ships. Suffering long-term famine and fighting, this first settlement was finally abandoned in 1561. A presidio was constructed on Santa Rosa Island in 1722 near the location of the more recent Fort Pickens. Hurricanes in 1741 and 1752 forced its relocation to the mainland.

Pensacola Beach for many years remained largely undeveloped. The Casino Resort was the first tourist destination constructed on the island (at the present day location of Casino Beach) where a variety of special events including beauty pageants, fishing tournaments and boxing matches were held from the 30s through 50s. With a bar, tennis courts, bath houses, and a restaurant, it was a popular resort until it eventually closed in the 1960s.

The entire island was initially owned by the federal government. In order to promote infrastructure and growth on the island, the federal government leased the lands now encompassing Pensacola Beach to the Santa Rosa Island Authority (SRIA), which in turn has leased the property to homeowners. As a result, all structures on the island have 99-year renewable leases with the SRIA rather than ownership of the land itself. 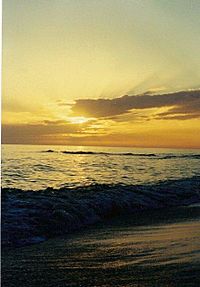 While generally cooler than most of peninsular Florida, Pensacola Beach maintains a more stable temperature year round than inland areas of Pensacola and Escambia County. As such, winter lows are several degrees warmer than Pensacola proper and summer highs are generally cooler as a result of the surrounding waters. As with many islands, Pensacola Beach enjoys sea breezes which begin around noon and end around sunset in the summer.

The Deepwater Horizon, a BP-operated oil-drilling rig in the Gulf of Mexico off the Louisiana coast, exploded April 20, 2010, eventually releasing almost 5 million barrels of oil into the Gulf before being capped on August 4, 2010. Oil from the explosion did not reach Pensacola Beaches until June 4, 2010. Crews posted along Escambia County’s coastline quickly cleaned much of the oil that was evident along the beaches. Tourism in the Pensacola Beach area was adversely affected during the summer of 2010.

As a community located on a low-lying barrier island, Pensacola Beach is vulnerable to hurricanes. Landfalling storms have been known to drive storm surge over the island, damaging or destroying man made structures and causing beach erosion. In 1995, two hurricanes made landfall on the island. Hurricane Erin made landfall in August while Hurricane Opal blasted the island just two months later, leveling some dunes and destroying a number of homes.

On 16 September 2004, Hurricane Ivan devastated the Pensacola Beach area, destroying more than 650 homes and damaging many others. Ivan was the last Hurricane to make Florida landfall in 2004, one of the most destructive hurricane seasons in decades.

On 10 July 2005, Dennis made landfall between Pensacola Beach and east-end Navarre Beach. However, as with Erin several years earlier, the damage on Pensacola Beach was not nearly as extensive as predicted.

The island has been subject to mandatory evacuation order during some of these hurricanes. 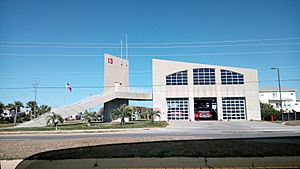 The hub of beach activity, Casino Beach, on Pensacola Beach, named after the original casino that stood this location is a popular beach access. The location is dotted with restaurants and family entertainment areas. It is situated next to the Pensacola Beach Gulf Pier and is equipped with lifeguard stands and station, volleyball courts, snack bar and large parking lot. The Gulfside Pavilion hosts a "Bands on the Beach" concert series during the Summer tourist season.

The Boardwalk is on the Santa Rosa Sound side of the island, directly across from Casino Beach. Retail shops, restaurants, nightclubs, street musicians and sidewalk artists line it. The Boardwalk has a large sea shell stage where concerts are held several times a year.

Located at the western end of Santa Rosa Island, Fort Pickens was completed in 1834 and used until WWII, when modern weapons made traditional coastal defenses obsolete. It is open to the public as part of the Gulf Islands National Seashore, with a fee required for entry; campsites are also available for a fee. 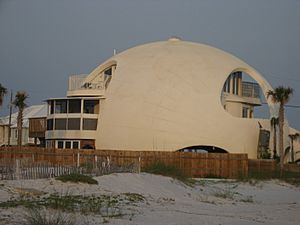 Pensacola Beach is home to several "novelty houses", including the house "Dome of a Home", built in 2002 using a monolithic dome in the form of a large concrete dome, designed to structurally withstand hurricane-force winds at 133 m/s and storm surge. It withstood hurricane Ivan and Dennis. It is also known as the "Flintstone Home" due to the fact it resembles a rock home. 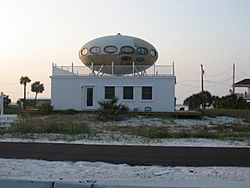 Another novelty house is the house with a UFO-shaped Futuro attached as a second story. This Futuro house is sometimes called the "Spaceship House."

There are only two traditional churches on the island of Pensacola Beach. It is under the laws and guidelines of the Santa Rosa Island Authority that these be the only churches on the island. However, since around 2011, at least two other area churches have held satellite church meeting and openly worshipped on the water's edge on Sunday mornings. 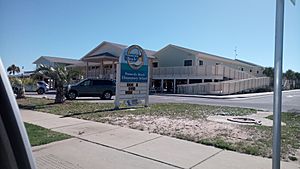 There is one school on Pensacola Beach. The Pensacola Beach Elementary School, within the Escambia County School District (ECSD), is for children from kindergarten through fifth grade. This school has an enrollment ranging from 120 to 140 students. All elementary-school age children on Pensacola Beach are eligible to attend the school. The first year the school was open, for the school year 1977–1978, classes were held in an empty A-frame house. The Pensacola Beach Volunteer Fire Department building was also used in aiding the teachers and administrators. In November 1977, four portable buildings were moved to the present site. They school has received the 5 Star School award since 1998. In 2001 the Pensacola Beach Elementary lost its direct district operational control and became a charter school. In September 2004 Hurricane Ivan destroyed an office and four classrooms. Jeff Castleberry, the principal, argued that ECSD would have closed the school if it had direct operational control. The costs to fix the damage at Pensacola Beach Elementary was $1.5 million. The campus is adjacent to the Gulf of Mexico and is built on stilt. The school has been described as one of several Escambia County charter schools that "exemplify charter schools at their finest".

All content from Kiddle encyclopedia articles (including the article images and facts) can be freely used under Attribution-ShareAlike license, unless stated otherwise. Cite this article:
Pensacola Beach, Florida Facts for Kids. Kiddle Encyclopedia.