Hurricane Opal was a major hurricane that formed in the Gulf of Mexico in September 1995.

Opal was the 9th hurricane of the highly active 1995 Atlantic hurricane season. Opal was the strongest hurricane of the 1995 Atlantic hurricane season. It crossed the Yucatán Peninsula while still a tropical depression from September 27, then strengthened northward in the Gulf, becoming the most powerful Category 4 Atlantic hurricane before making a second landfall, October 4, in the Florida Panhandle near Pensacola as a 125-mph (201-km/h) hurricane. Opal devastated the Pensacola/Panhandle area with a 15-ft (5-m) storm surge and travelled up the entire state of Alabama, becoming a tropical storm in Tennessee. Opal also caused heavy damage in the mid-Atlantic states before dissipating.

Afterward, 50 people had died from flooding by Opal in Guatemala and Mexico, with another 13 deaths in the United States directly or indirectly related to Opal. Preliminary damage estimates were $3 billion. 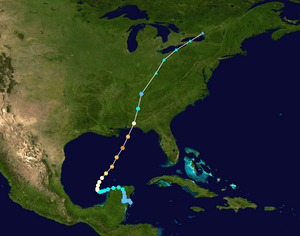 All content from Kiddle encyclopedia articles (including the article images and facts) can be freely used under Attribution-ShareAlike license, unless stated otherwise. Cite this article:
Hurricane Opal Facts for Kids. Kiddle Encyclopedia.