Opa-locka is a city located in Miami-Dade County, Florida, United States. As of the 2010 U.S. Census, the population was 15,219. The city was developed by Glenn Curtiss. Developed based on a One Thousand and One Nights theme, Opa-locka has the largest collection of Moorish Revival architecture in the Western Hemisphere, and streets with such names as Sharazad Boulevard, Sinbad Avenue, Sabur Lane, Sultan Avenue, Ali Baba Avenue, Perviz Avenue, and Sesame Street. Opa-locka has an area of 4.2 square miles (11 km2; 2,700 acres) and is located in the northwestern area of Miami-Dade County, Florida.

The name Opa-locka is an abbreviation of a Seminole place name, spelled Opa-tisha-wocka-locka (or Opatishawockalocka), meaning "wooded hummock" or "high, dry hummock."

Opa-locka was founded by aviation pioneer Glenn Curtiss in 1926. Curtiss developed the city with a Moorish architecture theme. While the 1926 Miami hurricane badly damaged the city and brought the Florida land boom to a halt, several Moorish-style buildings survived. Twenty of the original Moorish Revival architecture buildings have been listed on the National Register of Historic Places as part of the Opa-locka Thematic Resource Area.

The city was the first community in the United States to commemorate the first African-American President of the United States. A mile-long section of Perviz Avenue — from Oriental Boulevard to Ali Baba Avenue — was renamed Barack Obama Avenue on February 17, 2009.

In addition to the unique buildings, Opa-locka has a large general aviation airport, three parks, two lakes and a railroad station which is currently the tri-rail station. The city is a mixture of residential, commercial and industrial zones. The city was the backdrop for the making of movies such as "Living Dreams", Texas Justice, Bad Boys II and 2 Fast 2 Furious.

On June 1, 2016, Florida Governor Rick Scott issued Executive Order Number 16-135, declaring the City of Opa-Locka to be in a state of "Financial Emergency" under Florida Statute Section 218.503. According to the Executive Order:

On the same day, the Miami Herald reported that "Millions of dollars are in arrears as the city teeters on the edge of bankruptcy" and "City officials remain under an FBI corruption investigation" The article also reported that this financial emergency was the second declared for the city since 2002.

Just over a week earlier, Opa-Locka Commissioner Terence Pinder, apparently drove his SUV into a tree at high speed, which killed him. He was scheduled to turn himself over to prosecutors the next day, having faced bribery charges.

On June 10, Governor Scott named the Financial Emergency Board, consisting of:

The City of Opa-Lacka does not have an Audit Committee to help select the public accountant to perform the independent audited financial statements, as required by Florida Statute 218.391 (2)

Note: the US Census treats Hispanic/Latino as an ethnic category. This table excludes Latinos from the racial categories and assigns them to a separate category. Hispanics/Latinos can be of any race

The Opa-locka Branch library is one of the 49 branches included within the Miami-Dade Public Library System. This branch is open to the public on weekdays offering an After School Club and Storytime for children.

Opa-locka had 30 houses of worship in 1996. During that year, Oscar Musibay of the Miami New Times said, "Like South Beach has hotels, Opa-locka has churches." 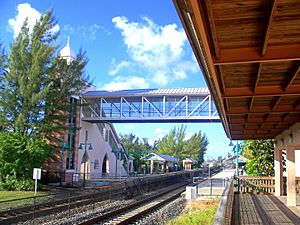 The modern Opa-Locka Tri-Rail commuter station, next door to the former Opa-Locka Railroad Station built by the Seaboard Air Line Railroad and now on the National Register of Historic Places

Opa-locka is served by Opa-locka Executive Airport, owned and operated by the Miami-Dade County Aviation Department.

Additionally, Opa-locka is served by Miami-Dade Transit buses and by Tri-Rail via the Opa-locka Station. 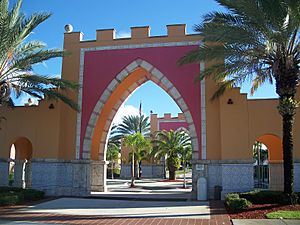 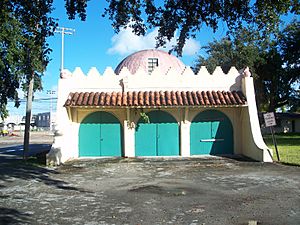 A building with Moorish features

All content from Kiddle encyclopedia articles (including the article images and facts) can be freely used under Attribution-ShareAlike license, unless stated otherwise. Cite this article:
Opa-locka, Florida Facts for Kids. Kiddle Encyclopedia.