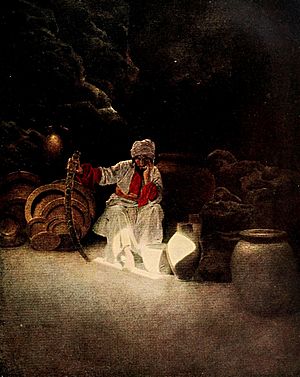 Ali Baba (Arabic: علي بابا‎code: ar is deprecated , ʿAli Bāba) is a fictional character, who is described in the adventure tale of Ali Baba and the Forty Thieves. It is believed by some critics that this story was added to One Thousand and One Nights by one of its European translators, Antoine Galland, who is an 18th-century French orientalist who may have heard it in oral form from a Middle Eastern story-teller from Aleppo. However, another writer and scholar Sir Richard Francis Burton said it was a part of the original One Thousand and One Nights. Most Arab and Persian(Irani) scholars seem to also agree with Burton.

All content from Kiddle encyclopedia articles (including the article images and facts) can be freely used under Attribution-ShareAlike license, unless stated otherwise. Cite this article:
Ali Baba Facts for Kids. Kiddle Encyclopedia.