Maitland is a suburban city in Orange County, Florida, United States, part of the Greater Orlando area. The population was 15,751 at the 2010 census. The area's history is exhibited at the Maitland Historical Museum. The city also hosts the Maitland Art Center, as well as notable examples of Mayan Revival architecture and Fantasy architecture, the Maitland Telephone Museum and the William H. Waterhouse House Museum. A SunRail station is located in Maitland on Highway 17-92. The city is named for Fort Maitland.

Maitland is one of the oldest incorporated suburban municipalities in central Florida. Although the area was previously inhabited by Native Americans, the town is named after Fort Maitland, which was built in 1838 on the western shore of Lake Fumecheliga (later Lake Maitland) during the Second Seminole War. After the war the fort was torn down, and the area remained rural for 30 more years, until a post office was constructed for settlers in the area. Around this post office, a town grew. This settlement came to be called Lake Maitland, and later Maitland. After the Civil War, the area was put into extensive citrus production.

Maitland was once a rural spot, but began to urbanized once Orlando's growth reached the town in the 1930s. During this period the community began to develop more rapidly and paved roads and improved the overall aesthetics of the town. Maitland is a suburb of Orlando. The town's "historical corridor" encompasses old residences still standing and occupied in the Lake Lily-Lake Catherine area and extending through the central portion of the city. Examples of these century-old homes are the "Pine Crest Villa" (1891); "Chadburne Hall" (1890); the Kenneth McPherson Home (1926), a prime example of the "Tudor Revival" Style, rare to Florida; the Wise-Taliaferro House (1876), and the Hill-Stone House (1908). The area has always been a vacation spot because of its climate, location to theme parks and people. However, Maitland has recently become a location where affluent individuals have come to reside. Maitland has many picturesque parks along lakes, which attract many boaters. 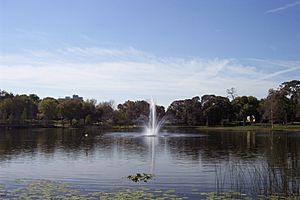 Maitland is peppered with a number of lakes, including Lake Lily pictured here.

Maitland is home to the nationally recognized and Central Florida's only full-time independent movie theater, Enzian Theater, in turn home to the Florida Film Festival. Maitland is also home to the Art & History Museums  — Maitland, including the Maitland Art Center (formerly the Research Studio, 1937), which is a designated a National Historic Landmark (2014) for its unique Mayan Revival and Fantasy Architecture; the Maitland Historical Museum; the Maitland Telephone Museum; the William H. Waterhouse House Museum, also listed on the National Register of Historic Places ; and the Carpentry Shop Museum. Maitland is also home to The Roth Family Jewish Community Center of Greater Orlando, which serves as the center of Jewish life in Orlando and welcomes people of all backgrounds. 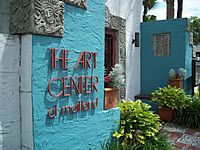 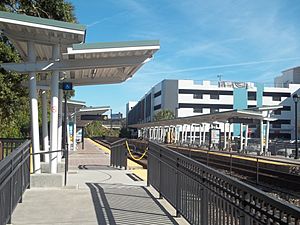 The Maitland Center was established in 1982 adjacent to Interstate 4. Today its 226 acres (91 ha) include over 400 businesses and over 45 office buildings.

Worldwide Brands has its headquarters in Maitland.

Other local employers include:

SunRail, the regional commuter rail service, operates a passenger rail station in Maitland. The first 31-mile (50 km) segment of the system (between DeBary and Sand Lake Road in Orange County) began operations on May 1, 2014.

Institutions of higher education include:

All content from Kiddle encyclopedia articles (including the article images and facts) can be freely used under Attribution-ShareAlike license, unless stated otherwise. Cite this article:
Maitland, Florida Facts for Kids. Kiddle Encyclopedia.