Rockledge is the oldest city in Brevard County, Florida. The city's population was 24,926 at the 2010 United States Census, and is part of the Palm Bay−Melbourne−Titusville Metropolitan Statistical Area. 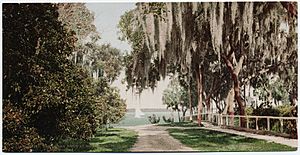 A view of early Rockledge, FL and the Indian River 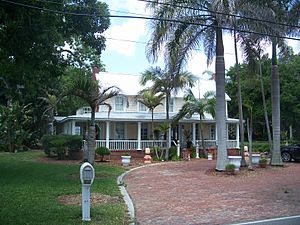 Modern-day picture of the Magruder-Whaley House

Rockledge was officially founded on August 7, 1887, making it the oldest incorporated municipality in Brevard County. The name Rockledge, attributed to Gardner S. Hardee, an early settler, comes from the many ledges of coquina rock that line the Indian River. Other sources refer to a man named Cephas Bailey Magruder, who built his home after settling in the area in 1876 near the Indian River. Magruder called his home "the rockledge home" and the name was eventually attributed to the whole town. It was originally referred to as Rock Ledge; the two-word name persisted through the 19th century. Early industry in the area was based on the citrus trade and accommodation for tourists traveling to South Florida via the Atlantic Intracoastal Waterway of the Indian River.

Towards the early part of the 20th century, Rockledge was known as a resort town. In the winter months, the population would rise from 200 to almost 2,000 people. Up until about 1911, access to Rockledge was via boat and rail. Steamboats in the Indian River connected with Henry Flagler's trains to bring people to the North. Small boats, sailboats, and small launches frequently stopped to unload freight and passengers. Most of the tourists in this time were wealthy and would use the boats to connect to the rail system at that time. After World War I, the automobile allowed the average person to travel to the area and their encampments dotted the area. The Dixie Highway was completed in 1915 and spanned most of Florida. In the 1920s, US1 was paved and replaced the Dixie Highway.

President Grover Cleveland and his wife visited the city in 1888.

The town had several large hotels in the late 19th century to the early 20th century that catered to Northern tourists escaping cold winters. Condominiums are located at the previous site of Hotel Indian River.

Rockledge underwent an expansion further west and south in the 1960s when it became a bedroom community for the nearby Kennedy Space Center. Several hundred families from all over the United States settled in the city with the advent of the Apollo missions and the space shuttle program.

Barton Boulevard replaced US 1 as the town's economic center as new subdivisions spread south along Fiske Boulevard. By the 1970s, the bulk of Rockledge's population lived between US 1 and I-95.

Levitt Park and Woodsmere were built atop a gladiola farm and an orange grove. The huge Australian Pine trees at the southernmost points of Fiske Boulevard are all that remain of the grove's windbreaks. The subdivision of Silver Pines, the most lavish and affluent community in Rockledge, while part of unincorporated Brevard County outside the city limit, was also built during this period and is identified by citizens as a part of the city.

It is bounded on the north by Cocoa, on the west by the St. Johns River and scrubland, to the south by Viera (unincorporated) and Melbourne, and to the east by the Indian River Lagoon and Merritt Island (unincorporated) on the opposite shore.

Rockledge has a humid subtropical climate, Köppen climate classification Cfa. The area's warm and humid climate is caused primarily by its proximity to the Gulf Stream, which flows off the east coast of Florida. There are two major seasons which characterize the area. One is hot and rainy, lasting from June until late September. The other is the dry season, October through May, brings more moderate temperatures and less frequent rainfall.

Rainfall can run off from the city into the Indian River Lagoon, with resultant pollution. As a result, the city has banned fertilizing from June 1 to September 30 annually.

There were 7,864 households, out of which 31.0% had children living with them, 56.8% were married couples living together, 11.9% had a female householder with no husband present, and 27.8% were non-families. 22.5% of all households were made up of individuals, and 9.5% had someone living alone who was 65 years of age or older. The average household size was 2.51 and the average family size was 2.93.

Per the 2000 Census, the population was distributed as follows:

In 2010, the city had the lowest percentage of people living in poverty of any municipality measured in the county, 5%, compared to an average of 10% countywide.

Rockledge has the following parks:

Local businesses focus on technology and aerospace, especially those related to nearby Kennedy Space Center and Cape Canaveral.

Citrus grove production is nominal, producing citrus confections, juice and souvenirs for the tourist trade and for local consumption.

Rivian Automotive, a tiny start-up, plans to begin production of cars in 2013.

Rockledge has the following annual community events, festivals, and parades:

Rockledge is served by U.S. Route 1. Major east–west roads are oriented towards this north–south road.

The following are at least four-lane roads, unless otherwise designated.

All content from Kiddle encyclopedia articles (including the article images and facts) can be freely used under Attribution-ShareAlike license, unless stated otherwise. Cite this article:
Rockledge, Florida Facts for Kids. Kiddle Encyclopedia.