Fort Meade is a city in Polk County, Florida, United States. The population was 5,691 at the 2000 census. As of 2004, the population recorded by the U.S. Census Bureau is 5,761. It is part of the Lakeland–Winter Haven Metropolitan Statistical Area. The city was named for George Meade, an officer in the Second Seminole War. Fort Meade is home to Fort Meade Middle-Senior High School, several historic buildings, Streamsong resort and Patterson Park. The area is popular with kayakers and canoers. 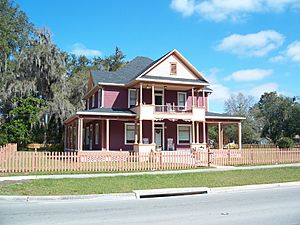 The historic Reid House, built circa 1900 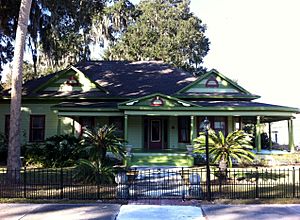 Fort Meade is the oldest city in Polk County, dating its origins to 1849 when it was an old military road from Tampa (Fort Brooke) to Fort Pierce during the Indian wars. The 1880s business district was located on old Wire Street (now Broadway), which was a casualty of four devastating fires. Today, there are over 150 buildings which are designated as landmarks. In the 1890s the Fort Meade Street Railway operated a horse-drawn service in the town.

The earliest known burial is John I. Hooker (1821–1862) located in the town's Evergreen Cemetery. Fort Meade's Christ Church (Episcopal) located at 526 North Oak, was built in 1889. It is a frame vernacular with Gothic Revival elements and was designed by architect J. H. Weddell. A minister named C.E Butler had committed suicide at the church in 1894. Located next to Christ Church is the famous Rev. Wm James Reid House. Located within the historic district, the house was used for the HBO motion picture The Judgement, featuring Blythe Danner, Keith Carradine and Jack Warden (1990).

Future Confederate General Stonewall Jackson was stationed at the fort in 1851. The town was burned by Union forces in 1864 and all of the original structures were destroyed, except the second fort which was dismantled in the 1890s. Fort Meade has over 300 homes on the National Register of Historic Places and a handful that date to the late 1800s.

Fort Meade is located in the humid subtropical zone, as designated by (Köppen climate classification: Cfa). 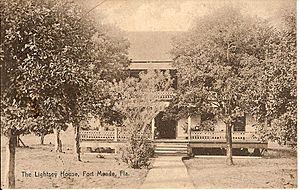 Lightsey House pictured in a 1907 postcard

There were 2,068 households out of which 31.8% had children under the age of 18 living with them, 52.7% were married couples living together, 16.4% had a female householder with no husband present, and 26.1% were non-families. 22.2% of all households were made up of individuals and 11.5% had someone living alone who was 65 years of age or older. The average household size was 2.72 and the average family size was 3.16.

As of July 20, 2011, Fort Meade officially became only the second city in all of Florida to be designated as a "Blueway" community by the Florida Paddlers Association. Fort Meade Outdoor Recreation Area is a popular launching and pick-up site for kayak and canoe enthusiasts and is the site for the annual Peace River Paddle hosted by Florida Paddlers.

All content from Kiddle encyclopedia articles (including the article images and facts) can be freely used under Attribution-ShareAlike license, unless stated otherwise. Cite this article:
Fort Meade, Florida Facts for Kids. Kiddle Encyclopedia.