Thomas Andrew "Colonel Tom" Parker (born Andreas Cornelis van Kuijk; June 26, 1909 – January 21, 1997) was a Dutch-born American talent manager, best known as the manager of Elvis Presley. His management of Presley defined the role of masterminding talent management, which involved every facet of the client's life and was seen as central to the success of Presley's career. 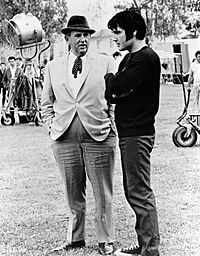 Presley said of Parker, "I don't think I'd have ever been very big if it wasn't for him. He's a very smart man." For many years, Parker falsely claimed to have been born in the United States, but it eventually emerged that he had been born in the Netherlands.

Parker first became involved in the music industry as a music promoter in 1938, working with popular singer Gene Austin.

In 1948, Parker received the rank of colonel in the Louisiana State Militia from Jimmie Davis, the governor of Louisiana and a former country singer, in return for work Parker did on Davis' election campaign. The rank was honorary since Louisiana had no organized militia, but Parker used the title throughout his life, becoming known simply as "the Colonel" to many acquaintances.

Parker made his last public appearances in 1994. By this point, he was a sick man who could barely leave his own house. On January 20, 1997 he suffered a stroke and died that morning.

All content from Kiddle encyclopedia articles (including the article images and facts) can be freely used under Attribution-ShareAlike license, unless stated otherwise. Cite this article:
Colonel Tom Parker Facts for Kids. Kiddle Encyclopedia.