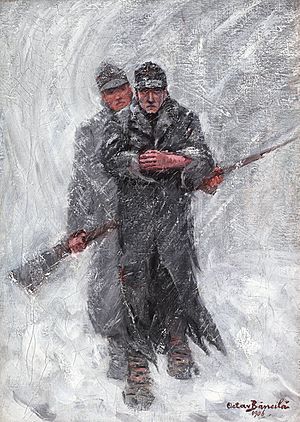 Desertion is a military word which means a soldier has left his position without permission. The soldier does not plan on returning. The term Absence Without Leave (AWOL) can also be used, but is usually used where the soldier does intend to return. Usually a soldier who has been AWOL for more than 30 days is listed as a deserter. Deserting is treated as a serious offence. In the US military, the punishment for desertion can be the death penalty. The last US soldier executed for desertion was Eddie Slovik in 1945. No U.S. soldier has been given more than 18 months in prison for desertion during the Iraq War.

All content from Kiddle encyclopedia articles (including the article images and facts) can be freely used under Attribution-ShareAlike license, unless stated otherwise. Cite this article:
Desertion Facts for Kids. Kiddle Encyclopedia.