Fort King (also known as Camp King or Cantonment King) was a United States military fort in north central Florida, near what later developed as the city of Ocala. It was named after Colonel William King, commander of Florida's Fourth Infantry and the first governor of the provisional West Florida region.

The fort was built in 1827 during United States tensions with the Seminole in Florida, a tribe of mostly Creek people who formed in the early nineteenth century. Originally established to serve as a buffer between new settlers and the Seminole, the fort became an important base in the 1830s for the United States Army during removal of the Seminole and the Seminole Wars. It later served as a courthouse in 1844 after the organization of Marion County, but was eventually abandoned altogether. Residents took it apart to salvage building materials. The site of the fort is preserved as a National Historic Landmark near the corner of East Fort King Street and 39th Avenue in Ocala. In late 2017, the fort was newly reconstructed to be as historically accurate as possible.

Archeological investigation has revealed the site was occupied during two lengthy periods by varying cultures of indigenous peoples, beginning as early as 6500 BC, more than 8,000 years ago.

Archaeological investigations have revealed that the area was inhabited long before the arrival of the Spanish in the area. At least two periods of occupation have been identified: between 6500 and 2000 B.C., and 200 to 1500 A.D.

Fort King was constructed by the United States Army in 1827 to serve as a buffer between the Seminole (who occupied territory to the south according to the Moultrie Creek Treaty reservation area) and European Americans settling north of this point. It was located at the nexus of a system of military roads. From the fort, Fort King Road led to Fort Brooks (near Orange Springs); Fort McCoy; a ford at the St. Johns River which would become the town of Astor; Palatka, Jacksonville, and Fort Brooke (on Tampa Bay), among others. The fort fell into disuse after 1829.

In 1832, the fort was activated as a base for the United States removal of the Seminole to Indian Territory west of the Mississippi River, as part of the Treaty of Payne's Landing. The Second Seminole War, beginning in late 1835 in central Florida, heightened the importance of the fort. It was a center of United States military activity during the next seven years, due to its strategic location. Abandoned for nearly a year between mid-1836 to early 1837 after the Seminole burned it, the fort still remained functional until the war's end in 1842.

After the organization of Marion County, the fort was used in 1844 as its first courthouse. Eventually, the building was abandoned. Early residents thoroughly took apart the fort to salvage building materials. 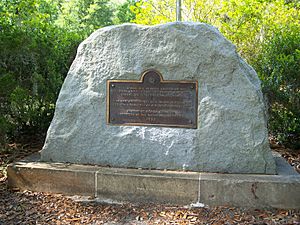 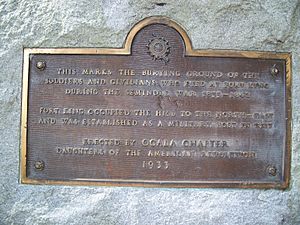 The 1953 movie Seminole is set around Fort King, although the events portrayed are historically inaccurate. Today no visible signs of the fort remain; the site is 37 acres of undeveloped, vacant land in the middle of a residential area. The site is owned by the City of Ocala and Marion County. Three historical markers commemorate the site: a Memorial Marker near the Fort Site, a National Historic Landmark near the former location of the fort (it was designated in February 2004), and a marker at the old Fort Cemetery Site. In 2013 the Fort King Heritage Association was formed to develop, promote and protect the site.

All content from Kiddle encyclopedia articles (including the article images and facts) can be freely used under Attribution-ShareAlike license, unless stated otherwise. Cite this article:
Fort King Facts for Kids. Kiddle Encyclopedia.