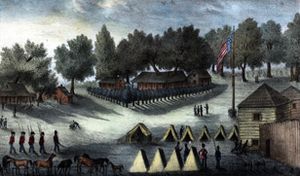 Fort Brooke was a historical military post situated on the east bank (at the mouth) of the Hillsborough River in present-day Tampa, Florida. The fort was established in 1824, soon after Florida was acquired by the United States from Spain. It was an important post during the Seminole Wars and of lesser importance during the United States Civil War. It was decommissioned in 1883, and the land was eventually sold to private interests.

Fort Brooke was located on what is now the southern end of downtown Tampa along the Garrison Channel. It stretched approximately from the current location of the Tampa Bay History Center on the east to the Tampa Convention Center on the west, and Amalie Arena, Cotanchobee/Fort Brooke Park, two large hotels, and other structures have been built in its footprint. Unmapped army and Seminole cemeteries along with many artifacts were discovered during various construction projects. The soldiers' remains were re-interred at the Florida National Cemetery in Bushnell, the native remains were transferred to the Seminole Tribe of Florida, and the artifacts were given to the Tampa Bay History Center and other institutions for research and preservation.

Fort Brooke as a military outpost

In 1823, Colonels George Mercer Brooke and James Gadsden of the United States Army were ordered to establish a military presence on Tampa Bay in the newly acquired Florida Territory to contain the Seminole Indians according to the Treaty of Moultry Creek and to curtail illegal activities along the Gulf coast. On 10 January 1824, Brooke and four full companies of the U.S. 4th Infantry Regiment from Pensacola established "Cantonment Brooke" at the mouth of the Hillsborough River, just about where today's Tampa Convention Center sits in downtown Tampa. The site was marked by a huge hickory tree atop an ancient Indian mound, most likely built by the Tocobaga culture centuries before. Brooke directed his troops to clear the area for the construction of a wooden log fort and support buildings, but he ordered that several ancient live oak trees inside the encampment be spared to provide shade and cheer. In 1824, the post was officially rechristened Fort Brooke.

Fort Brooke would serve as a major outpost on Florida's west coast during all three Seminole Indian Wars and the Civil War. The fort also played a part in the development of the village of Tampa. In October 1863, the small Civil War Battle of Fort Brooke was fought nearby. On May 6, 1864, both Fort Brooke and Tampa were captured by Union forces. As Tampa languished during the 1870s and early 1880s, so did Fort Brooke. The last roll call of soldiers occurred in 1882 and the post was decommissioned by the U.S. Army in 1883.

Closure and as incorporated town

After the fort's closure, most of the land was open to homesteaders, and some garrison buildings remained on site. Shortly after the post was decommissioned, Fort Brooke became an independent incorporated town in 1885. Fort Brooke was annexed by Tampa in 1907.

All content from Kiddle encyclopedia articles (including the article images and facts) can be freely used under Attribution-ShareAlike license, unless stated otherwise. Cite this article:
Fort Brooke Facts for Kids. Kiddle Encyclopedia.