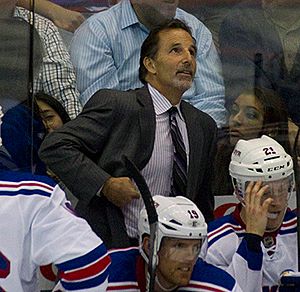 He coached the Tampa Bay Lightning and won both the Jack Adams Award and the Stanley Cup, with the Lightning, in 2004. He coached the New York Rangers from February 23, 2009 to May 29, 2013. He was fired by the Rangers after a disappointing playoff run. He was hired to coach for the Vancouver Canucks for only one season before being relieved of duty after failing to qualify for the playoffs. He is currently with the Columbus Blue Jackets as their coach.

All content from Kiddle encyclopedia articles (including the article images and facts) can be freely used under Attribution-ShareAlike license, unless stated otherwise. Cite this article:
John Tortorella Facts for Kids. Kiddle Encyclopedia.