The history of Englewood begins when gold was discovered on what came to be called Little Dry Creek by William Green Russell, an early settler of the high plains, in 1858. Two years later, Thomas Skerritt, considered to be the founder of the city, established a home in the area, which was called Orchard Place. Four years later the first road connecting Denver and Orchard Place was created by Skerritt himself using his own plough. In 1879 the first telephone arrived in the area.

1883 was an important year, as it was the year that the Cherrelyn horsecar path was laid. The Cherrelyn trolley was and is an important city icon, being carried up Broadway by horse and down by gravity. 1903 brought incorporation, but Skerritt was edged out by J.C. Jones as the first city mayor. Jones was a prominent landowner, having originally owned almost all of what is now north Englewood. The next two years brought the establishment of the first newspaper in the city, soon to be named the Herald. In 1905 Swedish National Sanitorium was founded, soon to become the massive present-day Swedish Medical Center. 1906 brought the first pavement and street lights, and a year later the police and fire departments were established. In 1908 the famed Cherrelyn horse trolley stopped running. 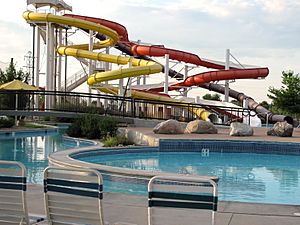 1948 was a start of a great period of change for the city. 2,500 acres (1,000 ha) on the Platte Canyon were purchased, and soon McLellan Reservoir was created. This ensured water independence from the powerful Denver Water, and in fact, Englewood provides water to most of the south metro area now due to its vast, early-established water rights. Soon after the city embarked on a huge building boom; most of the city was in fact built up by 1960. 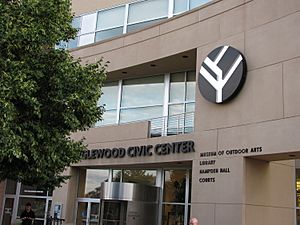 In 1965 City Park was sold to make way for Cinderella City, the largest mall west of the Mississippi River and one of the largest in the world when it opened in 1968. The developer provided the funds to create a vast city park network to replace the single City Park that the mall was built on. Thirty years later, the city demolished the defunct mall in order to make way for a new, transit-oriented development that would also contain a new Civic Center, library, and the relocated city hall. The RTD completed its southwest light rail corridor in 2000, and established passenger rail transit in Englewood.

In 2004 Englewood opened the Pirates Cove water park as part of a multimillion-dollar improvement package for the city parks system. In addition to Pirates Cove many improvements were made to the South Platte River trail system and to the Englewood Recreation Center, originally constructed in 1975.

Englewood is a full-service city with its own, independent park, library, and public works systems. Englewood provides snowplow service to neighboring municipalities and water to a large portion of the metro area.

Englewood features a climate very similar to that of Denver, but is slightly milder and more stable due to the city's establishment in a very low part of the South Platte River valley. Winds are very sparse throughout the city. The Köppen Climate Classification system labels Englewood as having a cold semi-arid climate, abbreviated as BSk.

Central Englewood can be roughly divided into quadrants, with the x-axis being Hampden Avenue and the y-axis being Broadway. The northwest is the oldest section of the city, containing the new CityCenter, downtown, and housing stock dating to the 1910s. This is also where the massive General Iron metal fabrication plant was located, which closed in the 1990s and has now been demolished, awaiting redevelopment and a new proposed light rail station at Bates Avenue. The southwest section is home to a newer housing stock as well as a significant percentage of Englewood's industrial and production facilities. 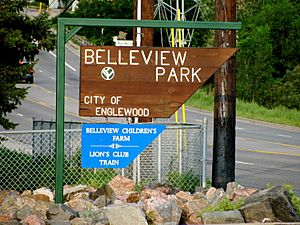 The southwest side also features Englewood's largest park, Belleview Park, and a small reservoir. The southeast section is almost purely residential and is newer than the north and southwest sides. Finally, northeast Englewood is home to one of the largest hospital complexes in the metro area. Swedish Medical Center and Craig Hospital, a top-ten nationally ranked rehabilitation hospital for spinal cord and traumatic brain injury rehabilitation, comprise the hospital district, the backbone of the city economy. The Hampden Hills neighborhood hosts one of the largest conglomeration of apartment complexes in the metro area, and is also the newest developed part of the city as well as the wealthiest.

Englewood also features some large annexed areas, such as the northwest annex that extends to Evans Avenue in Denver, which is chiefly manufacturing and industry. Finally, Englewood extends southeast to the Highline Canal, and southwest past Federal Blvd. approaching the Town of Bow Mar.

There were 14,392 households out of which 23.6% had children under the age of 18 living with them, 36.7% were married couples living together, 10.8% had a female householder with no husband present, and 48.1% were non-families. 37.9% of all households were made up of individuals and 9.5% had someone living alone who was 65 years of age or older. The average household size was 2.15 and the average family size was 2.88.

The place name "Englewood" is assigned to three ZIP codes(80112, 80112, 80113) which cover areas adjacent to the city on the west and east, and an area southeast of the city that is much larger than the city itself. Thus, many addresses written as "Englewood, Colorado" are actually in the Arapahoe County cities of Sheridan, Cherry Hills Village, Greenwood Village, or Centennial; or in Meridian in unincorporated Douglas County. This area includes part of the Denver Tech Center and the surrounding commercial development along the I-25 corridor, which is often erroneously attributed to Englewood; the city actually lies several miles west.

All content from Kiddle encyclopedia articles (including the article images and facts) can be freely used under Attribution-ShareAlike license, unless stated otherwise. Cite this article:
Englewood, Colorado Facts for Kids. Kiddle Encyclopedia.