The City of Sheridan is a home rule municipality located in Arapahoe County, Colorado, United States. Sheridan is a part of the Denver–Aurora–Lakewood, CO Metropolitan Statistical Area. The population was 5,664 at the 2010 census. 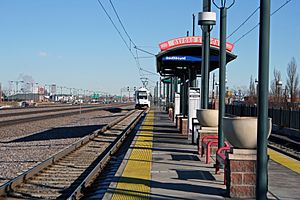 Sheridan was originally part of the Indian Territory and has always been a small community. The first white settler of what would become Sheridan was John McBroom in the spring of 1859. He homesteaded 160 acres (0.65 km2). The town was initially named Petersburg. McBroom built his first log cabin near Bear Creek which he later abandoned in 1866 when he married Emma J. Bennett. He prospered as a farmer and found a viable market in Denver for his goods. He was joined by his brother, Isaac McBroom, in June 1860, who also homesteaded a little over 160 acres (0.65 km2). The laying out of the town of Sheridan is credited to Isaac. He was also responsible for the name change from Petersburg to Sheridan. Isaac McBroom's cabin can be toured at the Littleton Historical Museum.

Another prominent figure in Sheridan's early history was Peter Magnes. Originally from Sweden, Magnes was a farmer who immigrated to the United States at the age of 26. In 1859, his first daughter was born on the banks of Cherry Creek. He also purchased 160 acres (0.65 km2) of land and built a small log cabin. In 1865 Magnes laid out the town of Petersburg and encouraged Swedish families to immigrate to his town. The town had a railroad, hotel, blacksmith, church, newspaper, post office and, of course, taverns. The state of Colorado was formed in 1876, putting Sheridan within its new boundaries.

Citizens began moving toward incorporation of Sheridan in January 1890. There was some dispute among the petitioners about boundaries, and the final results were filed in February 1890. On April 14, 1890, the town of Sheridan was incorporated.

Sheridan gets its name from U.S. Army General Philip H. Sheridan. General Sheridan established Fort Logan, which was originally known as the "Camp close to Denver". It was on the site known as the Johnson Tract, south of the city, with a water supply, the proximity of the railroad, "available space for a parade ground, artesian well possibilities, the beautiful view and the distance from Denver and its saloons." Because of the military post Sheridan continued to flourish. However, eventually the post was shut down, and it is now a mental health facility that borders Sheridan.

Sheridan has remained a community that continues to influence the surrounding areas, most recently with current redevelopment projects.

Sheridan was the setting for the short-lived western TV series Legend. When the writers originally chose the name, they were not aware that the town of "Sheridan, Colorado" existed. The show takes place in 1876, some time before Sheridan was incorporated.

All content from Kiddle encyclopedia articles (including the article images and facts) can be freely used under Attribution-ShareAlike license, unless stated otherwise. Cite this article:
Sheridan, Colorado Facts for Kids. Kiddle Encyclopedia.