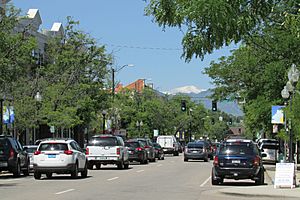 Littleton is the Home Rule Municipality in Arapahoe, Douglas, and Jefferson counties that is the county seat of Arapahoe County, Colorado, United States. The city is a part of the Denver-Aurora-Lakewood, CO Metropolitan Statistical Area. The city population was 41,737 at the 2010 United States Census, ranking as the 20th most populous municipality in the State of Colorado.

The city of Littleton's history dates back to the 1859 Pike's Peak Gold Rush, which brought not only gold seekers, but merchants and farmers to the community. Richard Sullivan Little was an engineer from New Hampshire that made his way out west to work on irrigation systems. Little soon decided to settle in the area at present day Littleton and brought his wife Angeline out from the East in 1862. The Littles, along with many neighbors, built the Rough and Ready Flour Mill in 1867, which provided a solid economic base in the community. By 1890, the community had grown to 245 people and the residents voted to incorporate the Town of Littleton.

Littleton lies on the South Platte River in the Colorado Piedmont region of the Great Plains a few miles east of the Front Range of the Southern Rocky Mountains. Most of the city lies on the east side of the river. Several small tributaries of the river flow northwest through the city; from north to south, these include Big Dry Creek, Slaughterhouse Gulch, Lee Gulch, and Dad Clark Gulch. In addition, there are several small lakes and reservoirs located along the river in the southwestern part of the city. Immediately west of the river are Cooley Lake, Bufflehead Lake, South Platte Reservoir, Eaglewatch Lake, Redtail Lake, and Blackrock Lake. East of the river lie Wolhurst Lake and McLellen Reservoir which is fed and drained by Dad Clark Gulch. Chatfield Reservoir lies immediately southwest of the city.

As a suburb of Denver, Littleton is part of the Denver-Aurora metropolitan area and the Front Range Urban Corridor. It shares a border with Denver and Englewood on the north, Greenwood Village on the northeast, Centennial on the east, Highlands Ranch on the south, Columbine and Columbine Valley on the west, and Bow Mar on the northwest.

Candlelight Walk
The Candlelight Walk is a Littleton tradition, featuring an evening of holiday festivities, culminating in the illumination of the trees on Main Street.

All content from Kiddle encyclopedia articles (including the article images and facts) can be freely used under Attribution-ShareAlike license, unless stated otherwise. Cite this article:
Littleton, Colorado Facts for Kids. Kiddle Encyclopedia.