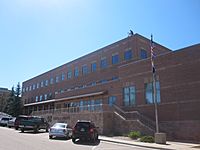 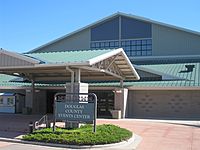 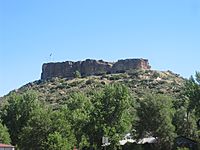 The "rock" of Castle Rock, Colorado

Douglas County is the seventh-most populous of the 64 counties of the U.S. state of Colorado. As of the 2010 census, the population was 285,465. The county seat is Castle Rock.

Douglas County is part of the Denver-Aurora-Lakewood, CO Metropolitan Statistical Area. It is located midway between Colorado's two largest cities, Denver and Colorado Springs. Douglas County has the highest median household income of any Colorado county or statistical equivalent. It is ranked ninth nationally in that category, and has the highest of any county or equivalent not in the eastern US.

Douglas County is lightly wooded, mostly with ponderosa pine, with broken terrain characterized by mesas, foothills and small streams. Cherry Creek and Plum Creek rise in Douglas County and flow north toward Denver and into the South Platte River. Both were subject to flash flooding in the past, Plum Creek being partially responsible for the Denver flood of 1965. Cherry Creek is now dammed.

Most residents commute to workplaces elsewhere in the metropolitan area outside of the county. Suburban development is displacing the ranching economy of the county.

Douglas County was one of the original 17 counties created in the Colorado Territory by the Colorado Territorial Legislature on November 1, 1861. The county was named in honor of U.S. Senator Stephen A. Douglas of Illinois, who died five months before the county was created. The county seat was originally Franktown, but was moved to California Ranch in 1863, and then to Castle Rock in 1874. Although the county's boundaries originally extended eastward to the Kansas state border, in 1874 most of the eastern portion of the county became part of Elbert County.

Recreation trails in the county include:

The Rueter–Hess Reservoir, when filled, may provide significant recreation including fishing, hiking, and non-motorized boating. If filled to capacity, surface size would be 1,140 acres, making this a fairly significant reservoir in Colorado and Douglas County's largest body of water.

There were 60,924 households out of which 47.2% had children under the age of 18 living with them, 73.8% were married couples living together, 5.7% had a female householder with no husband present, and 18.2% were non-families. 13.3% of all households were made up of individuals and 1.9% had someone living alone who was 65 years of age or older. The average household size was 2.88 and the average family size was 3.19.

Douglas County had the highest median household income of any Colorado county or statistical equivalent in 2000. In 2008, it ranked #8 in the United States in that category – it was one of two in the top 15 not in the vicinity of New York or Washington.

Douglas County has been recognized by a number of national periodicals:

All content from Kiddle encyclopedia articles (including the article images and facts) can be freely used under Attribution-ShareAlike license, unless stated otherwise. Cite this article:
Douglas County, Colorado Facts for Kids. Kiddle Encyclopedia.