Castle Rock is a home rule municipality that is the county seat of Douglas County, Colorado, United States. The most populous municipality of the county, the community's population was 48,231 at the 2010 United States Census, with an estimated population of 55,747 as of 2014. It is named for the prominent, castle tower-shaped butte near the center of town. Located midway between Denver and Colorado Springs, Castle Rock is part of the Front Range Urban Corridor. 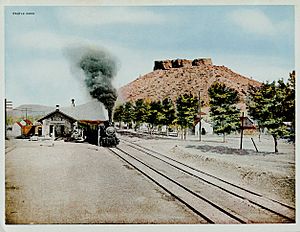 The region in and around Castle Rock was originally home to the Arapaho and Cheyenne people. They occupied the land between the Arkansas and South Platte Rivers.

White settlers were drawn to the area by rumors of gold and by land opened through the Homestead Act of 1862. However, it was the discovery of rhyolite stone, not gold, that ultimately led to the settlement of Castle Rock.

Castle Rock was founded in 1874 when the eastern Douglas County border was redrawn to its present location. Castle Rock was chosen as the county seat because of its central location.

One of the first homesteaders in the area near today's Castle Rock was Jeremiah Gould. He owned about 160 acres (0.65 km2) to the south of "The (Castle) Rock." At that time, the settlement consisted of just a few buildings for prospectors, workers, and cowboys. In 1874, Jeremiah Gould donated 120 acres (0.49 km2) to the new town that was also now home to the Douglas County government. For the beginning the six streets named Elbert, Jerry, Wilcox, Perry, Castle and Front were laid out to build the actual town of Castle Rock. The Courthouse Square was defined and about 77 lots, each 50 by 112 feet (34 m), were auctioned off for a total profit of US$3,400.

A new train depot brought the Denver and Rio Grande Railway to the area.

During the late 1800s and early 1900s, Castle Rock had a very active Rhyolite quarrying industry. Many Swedish immigrants arrived in the area to work in the quarries. 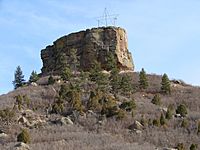 The town of Castle Rock is named after this prominent castle tower-shaped butte.

The town lies a few miles east of the Rampart Range of the Rocky Mountains on the western edge of the Great Plains. Castle Rock, the butte that is the town's namesake, sits just north of the town center. Other prominent landforms visible from Castle Rock include Dawson Butte, Devils Head, Mount Evans and Pikes Peak.

East Plum Creek, a stream within the South Platte River watershed, flows generally north through Castle Rock. Hangman's Gulch, which runs northwest then west around the north side of the town center, drains into East Plum Creek as do multiple unnamed gulches in the southern and western areas of town. McMurdo Gulch and Mitchell Gulch run north then northeast through eastern Castle Rock and drain into Cherry Creek east of town.

Castle Rock is within the Colorado Foothills Life Zone.

According to the United States Census Bureau, Castle Rock has a total area of 33.79 square miles (87.5 km2), all of it land.

Lying within the Front Range Urban Corridor, the town is part of the greater Denver metropolitan area. Castle Rock borders three communities, all to its north; from west to east, these are Castle Pines Village, the city of Castle Pines, and The Pinery. Other nearby communities include Franktown to the east, Larkspur to the south, Perry Park to the southwest, and Sedalia to the northwest.

Castle Rock experiences a semi-arid climate (Köppen BSk) with cold, dry, snowy winters and hot, wetter summers. On average, the town receives 18.79 inches (477 mm) of precipitation annually. Snowfall averages 61.8 inches (157 cm) per year. On average, January is the coldest month, July is the hottest month, and August is the month with the most precipitation. The hottest temperature recorded in Castle Rock was 99 °F (37 °C) in July 1973; the coldest temperature recorded was −35 °F (−37 °C) in January 1963.

Map of Neighborhoods in the Meadows Castle Rock

Link to a Map of the Neighborhoods in Castle Rock, Colorado

There were 16,688 households out of which 48.4% had children under the age of 18 living with them, 65.4% were married couples living together, 3.9% had a male householder with no wife present, 8.5% had a female householder with no husband present, and 22.3% were non-families. 17.7% of all households were made up of individuals, and 4.0% had someone living alone who was 65 years of age or older. The average household size was 2.86, and the average family size was 3.27.

Castle Rock is the 17th most populous municipality in Colorado and is the center of the burgeoning urbanization of the county. 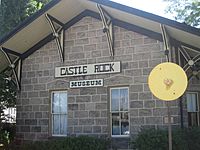 The Castle Rock Historical Museum is located in the former Denver and Rio Grande Railway depot building on Elbert Street. This building is purported to have been built in 1875. It is made of rhyolite taken from local quarries. In this museum visitors can see history of how Castle Rock changed over the years.

The Sri Venkateswara Temple's 8 acre complex located on Ridge Road is a significant landmark for the Hindu community of Colorado, attracting regular worshipers from as far away as Colorado Springs and Denver. The Temple also invites Swami's to lecture, offers classes, and undertakes outreach and service programs in the community.

In the 2000s, Castle Rock developed a positive reputation in American media as an affordable and family-friendly community:

All content from Kiddle encyclopedia articles (including the article images and facts) can be freely used under Attribution-ShareAlike license, unless stated otherwise. Cite this article:
Castle Rock, Colorado Facts for Kids. Kiddle Encyclopedia.