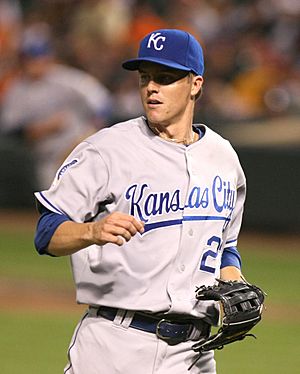 Donald Zackary "Zack" Greinke (born October 21, 1983 in Orlando, Florida) is a Major League Baseball (MLB) pitcher for the Arizona Diamondbacks. While pitching for the Kansas City Royals, he won the 2009 American League Cy Young Award, which is an award that goes to the player that is voted as the best pitcher in the league for that year. Greinke has also pitched for the Milwaukee Brewers, Los Angeles Angels of Anaheim, and the Los Angeles Dodgers.

The Royals selected Greinke in the first round of the 2002 MLB Draft with the sixth pick in the draft. Greinke played his first game for the Royals in May 2004. In 2006, he left the team during spring training because of depression and social anxiety disorder. He took some time away from baseball, and also did some pitching in the minor leagues. He returned to the Royals in 2007. In 2009, he had his best season for the Royals, finishing the season with a 16-8 record and a 2.16 ERA, which was the best ERA in Major League Baseball. He won many awards that year, including the Cy Young Award. He also set a Royals team record for the most strikeouts in one game on August 25, 2009, when he struck out 15 batters against the Cleveland Indians.

Greinke became frustrated with the Royals losing so many games, and asked the team to trade him. He was traded to the Milwaukee Brewers in December 2009. Greinke was then traded to the Los Angeles Angels of Anaheim in 2012.

All content from Kiddle encyclopedia articles (including the article images and facts) can be freely used under Attribution-ShareAlike license, unless stated otherwise. Cite this article:
Zack Greinke Facts for Kids. Kiddle Encyclopedia.