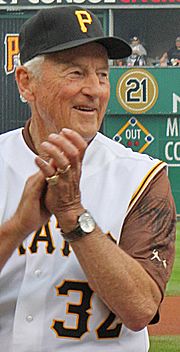 Vernon Sanders Law (born March 12, 1930) is an American former baseball pitcher. He played sixteen seasons in Major League Baseball (MLB) for the Pittsburgh Pirates. During his years at Pittsburgh, 1950 to 1951 and 1954 to 1967, he became a World Series champion (1960) and a two-time All-Star.

Law was born in Meridian, Idaho. He is a member of The Church of Jesus Christ of Latter-day Saints. His son, Vance (born 1956), played for many MLB teams.

All content from Kiddle encyclopedia articles (including the article images and facts) can be freely used under Attribution-ShareAlike license, unless stated otherwise. Cite this article:
Vern Law Facts for Kids. Kiddle Encyclopedia.