The Hope Memorial Bridge (formerly the Lorain–Carnegie Bridge) is a 5,865-foot-long (1,788 m) art deco truss bridge crossing the Cuyahoga River in Cleveland, Ohio. The bridge connects Lorain Avenue on Cleveland's west side and Carnegie Avenue on the east side, terminating just short of Progressive Field. Pairs of statues designed by sculptor Henry Hering and architect Frank Walker – officially named the "Guardians of Traffic" – stand on pylons at each end of the viaduct, symbolizing progress in transportation.

A bond issue to pay for the bridge was passed in 1921, but construction was delayed for years due to squabbles over how the money would be spent. The bridge was completed in 1932 at a cost of $4.75 million ($74,120,000 with inflation2018). It stands 93 feet (28 meters) above the river's waterline in order to allow shipping to pass unobstructed. A second, lower deck designed to carry truck and commercial traffic was never put into service. 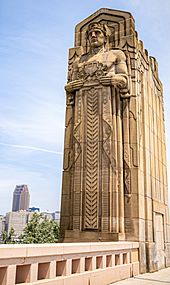 One of the "Guardians of Traffic"

The bridge was listed in the National Register of Historic Places on October 8, 1976, after a controversy in which county engineer Albert S. Porter threatened to remove the historic pylons to widen the span, stating, "Those columns are monstrosities and should be torn down and forgotten. There is nothing particularly historic about any one of them. We're not running a May Show here." The bridge was renovated in the early 1980s. On September 1, 1983, the Lorain–Carnegie bridge was officially renamed the "Hope Memorial Bridge"; initial reports claimed the new name was chosen in honor of William Henry "Harry" Hope, a local stonemason who helped build the "Guardians of Traffic" sculptures, and the father of comedian and former Cleveland resident Bob Hope. In the years since the dedication, however, claims have varied as to who exactly the bridge's name honors. Some have claimed the bridge was renamed specifically for Bob Hope; others the entire Hope family; and still others have claimed it recognizes Harry Hope along with the other workers who helped erect the giant sandstone pylons.

On December 10, 2012, officials opened a 14.5-foot-wide (4.4 m) multi-use path on the north side of the bridge, part of a project which will also add lighting to the Guardians of Traffic.

A pair of peregrine falcons nest under the bridge.

During the 2016 Republican National Convention, the bridge was a site of peaceful demonstration where a group to "Circle the City with Love" held hands while standing in silence, designed as an initiative to promote a moment of love and reflection.

The inaugural Guardian Mile road race will be run across the bridge on August 11, 2018. The elite field boasts multiple olympians and $14,000 up for grabs in prize money, as well as races for runners of all ages and levels.

All content from Kiddle encyclopedia articles (including the article images and facts) can be freely used under Attribution-ShareAlike license, unless stated otherwise. Cite this article:
Hope Memorial Bridge Facts for Kids. Kiddle Encyclopedia.