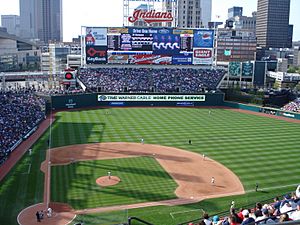 Progressive Field is a baseball park in Cleveland, Ohio. It is the home field of the Major League Baseball team called the Cleveland Indians. It opened in 1994, replacing Cleveland Stadium, which had been the Indians' home for over 60 years.

All content from Kiddle encyclopedia articles (including the article images and facts) can be freely used under Attribution-ShareAlike license, unless stated otherwise. Cite this article:
Progressive Field Facts for Kids. Kiddle Encyclopedia.