Asdrúbal José Cabrera ( born November 13, 1985) is a Venezuelan-American professional baseball infielder for the Arizona Diamondbacks of Major League Baseball (MLB). He previously played for the Cleveland Indians, Tampa Bay Rays, New York Mets, Philadelphia Phillies, Texas Rangers and Washington Nationals. Cabrera, a switch hitter, is a two-time All-Star. He was primarily a middle infielder for most of his career, but transitioned to playing more third base during the 2017 New York Mets season and began playing first base late in the 2019 Washington Nationals season.

Cabrera was raised by his parents, Asdrúbal, a truck driver, and Zunilde, a homemaker, in Puerto la Cruz, Venezuela. According to his family, Cabrera began switch hitting at three years old. In his youth, Cabrera closely followed Venezuelan shortstop Omar Vizquel's career. At 15 or 16 years old, he made a deal with his father that he would leave school and focus on baseball. If he were not signed within a year, he would return to school. At 15 years old he caught the attention of Seattle Mariners scout Emilio Carrasquel. 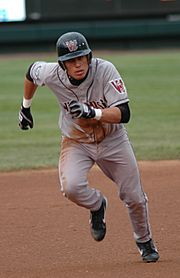 Cabrera playing for the Wisconsin Timber Rattlers in 2005

Cabrera was signed by the Seattle Mariners as an amateur free agent in 2002.

After coming up through the Mariners organization, he was acquired by the Cleveland Indians on June 30, 2006, in exchange for Eduardo Pérez. Cabrera spent the remainder of the 2006 season at Cleveland's Triple-A minor league team, the Buffalo Bisons.

Cabrera was a non-roster invitee to the Indians 2007 spring training but was reassigned to their minor league camp March 16. He started 2007 at Double-A with the Akron Aeros and was named to the Eastern League mid-season All-Star team. He was promoted to the Indians' Triple-A affiliate, Buffalo Bisons July 30 and then to Cleveland August 7.

Cabrera made his major league debut on August 8, 2007, against the White Sox, starting at second base. He was hitless in three at-bats and scored a run after he was hit by a pitch in the sixth inning. Four days later, Cabrera picked up his first major league hit, a double, against Mike Mussina of the New York Yankees. Cabrera's first home run came August 18, 2007, off Jason Hammel of the Tampa Bay Devil Rays in an 8–1 victory for the Indians. Cabrera eventually assumed Cleveland's everyday second baseman job despite being a natural shortstop, taking over for an ineffective Josh Barfield. In 2007, Cabrera helped power the Indians to a tie for the best record in baseball (96–66 with the Boston Red Sox) with his late-inning heroics. Cabrera batted .375 (21 for 56) in the 7th inning or later. For good luck, Cabrera wears a white beaded necklace that was made for him by his wife; because of this many gave him the nickname "Pearls".

At Progressive Field on May 12, 2008, Cabrera turned the 14th unassisted triple play in MLB history against the Toronto Blue Jays in the second game of a doubleheader. In the fifth inning, with Toronto's Marco Scutaro on first base and Kevin Mench on second, Cabrera dove and caught a Lyle Overbay liner, stepped on second base before leading runner Mench could return, and then tagged Scutaro, who had already passed second base. Hall of Fame member Bob Feller was in attendance to witness Cabrera's feat. On June 9, 2008, Cabrera was optioned to Triple-A Buffalo after hitting a team low .184 with 14 RBI in 52 games. Barfield was called back up to take his place. During his stay in Buffalo, Cabrera hit .326 in 34 games with 25 runs, seven doubles, four homers and 13 RBI. He was also named International League Batter of the Week after hitting .394, going 13 for 33, with three doubles, three homers and six RBI. Cabrera was called back up to the Indians on July 18, and hit .261 (30 for 115) with 3 homers, to raise his season average (with the Indians) from .184 to .216.

Cabrera hit his first career grand slam against New York Yankees' pitcher Anthony Claggett to cap a 14-run second inning for the Indians on April 18, 2009 at the new Yankee Stadium, and had a career-high four hits with five RBIs as the Indians went on to win 22–4. May 17, 2010 at Tropicana Field he suffered a broken left forearm that landed him on the 60-day disabled list. He later made two rehab starts on July 12 and 13, 2010 with the Mahoning Valley Scrappers, the Indians' Short-Season A affiliate, going a combined 2-for-6 with a walk, double, and 2 RBI in both games, the first a 10–5 loss and second a 4–2 win at Eastwood Field. Cabrera began his stint with the AA Akron Aeros on July 15, 2010 for more rehab work, before he was activated from the 60-day disabled list on July 20. 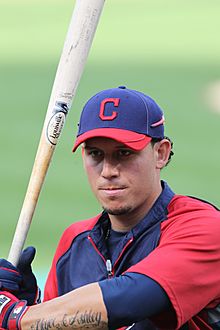 Cabrera with the Cleveland Indians in 2011

During the 2011, Cabrera hit 25 home runs (Indians record for a shortstop) and drove in 92 RBIs, both career highs. He also hit for a .273 average and stole 17 bases, while making several highlight plays at the shortstop position. For his heroics, he earned his first All-Star appearance while receiving the Silver Slugger Award and the Indians Heart and Hustle Award. He was also named the team's Man of the Year by the Cleveland Chapter of the Baseball Writers' Association of America.

On February 10, 2012, Cabrera signed a one-year, $4.55 million deal with the Indians to avoid arbitration. In the process, Cabrera filed for $5.2 million, but the Indians submitted $3.75 million. He was the final Indian eligible for arbitration to be under contract, and he was under team control through 2013.

On April 1, 2012, Cabrera agreed to a two-year, $16.5 million extension with a one-year club option that keeps him under Cleveland's control through 2014. On June 19, 2012, he hit a walk-off two-run home run off of Cincinnati Reds' closing pitcher Aroldis Chapman in the tenth inning, giving the Indians a 3–2 victory. It was Cabrera's second walk-off home run of his career. Cabrera was selected to appear in the 2012 MLB All-Star Game on July 1, 2012, as a reserve shortstop, joining teammate Chris Perez as one of two Indians voted to appear in the Midsummer Classic. Between the beginning of July and July 17, Cabrera's batting average had dropped 26 points (.300 on July 1 to .274 on July 17). Cabrera would record his first three-hit game since June 30 when he went 3 for 5 on July 18 in a win versus the Tampa Bay Rays. Two days later Cabrera would hit his first home run of July and first since June 29 when he hit a solo shot against the Baltimore Orioles on July 20. By July 22, however, Cabrera's batting average reached a season-low .272.

On June 3, 2013, Cabrera strained his right quadriceps while running to first base during a 7–4 loss against the New York Yankees at Yankee Stadium and was placed on the 15-day disabled list. He was activated from the disabled list on June 26. 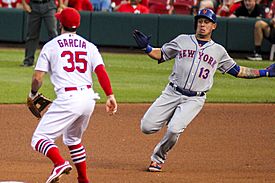 Playing for the Mets and sliding into second in St. Louis, 2016.

On December 10, 2015, Cabrera signed a two-year, $18.5 million contract with the New York Mets. His 2 year deal included a 3rd year team option which was exercised on November 3, 2017 at $6.5 million. On July 31, 2016, Cabrera strained the patellar tendon in his left knee while rounding third base against the Colorado Rockies. He was placed on the disabled list on August 2. He returned from the disabled list on August 19. He was named National League Player of the Week for the week ending August 27.

On July 27, 2018, Cabrera was traded to the Philadelphia Phillies in exchange for minor leaguer Franklyn Kilome. He made his Phillies debut a day later going 0 for 4 as the shortstop in a game versus the Cincinnati Reds. With the Phillies, he batted .228/.286/.392.

On January 24, 2019, Cabrera signed a one-year contract with the Texas Rangers. On August 1, Cabrera was designated for assignment. On August 3, the Rangers released Cabrera. He batted .235/.318/.393 with Texas.

Second stint with the Washington Nationals 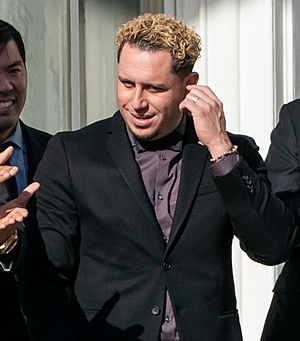 Cabrera celebrating the 2019 World Series win at the White House

Cabrera resides in Miami, Florida, with his wife, Lismar, and his son Meyer and daughter Ashley. He and his wife met in school in Venezuela and were married in 2007.

In April 2019 Cabrera and his wife became American citizens.

All content from Kiddle encyclopedia articles (including the article images and facts) can be freely used under Attribution-ShareAlike license, unless stated otherwise. Cite this article:
Asdrúbal Cabrera Facts for Kids. Kiddle Encyclopedia.