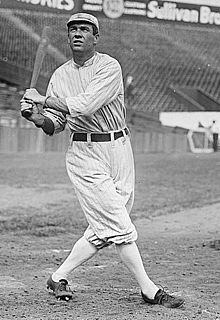 Tristram E. Speaker (April 4, 1888 - December 8, 1958), was an American baseball player. He was one of the greatest center fielders in baseball history, both on offense and defense. He had a .345 career batting average (fourth all-time), and the record for most career doubles, with 792. He played 22 seasons in Major League Baseball, with the Boston Americans/Red Sox, Cleveland Indians, Washington Senators, and Philadelphia Athletics. He also was the manager of the Indians from 1916 to 1926. Speaker was born in Hubbard, Texas on April 4, 1888.

Speaker, who retired from baseball in 1928, was chosen for the National Baseball Hall of Fame in 1937. His induction ceremony was held in 1939.

Speaker died of a heart attack in Lake Whitney, Texas on December 8, 1958. He was on a fishing trip with a friend when he died.

All content from Kiddle encyclopedia articles (including the article images and facts) can be freely used under Attribution-ShareAlike license, unless stated otherwise. Cite this article:
Tris Speaker Facts for Kids. Kiddle Encyclopedia.