The Blue Bridge (officially named the Pioneer Memorial Bridge) is a four-lane arch-truss bridge connecting Pasco, Washington to Kennewick, Washington. U.S. Route 395 crosses the Columbia River via this bridge. The name comes from the blue paint used on the truss superstructure, with white paint on the suspension beams. The bridge was painted green at time of construction (green being the state color of Washington). It is one of three bridges connecting Pasco to the other members of the Tri-Cities of Washington (Kennewick and Richland), along with the Cable Bridge to the east and the Interstate 182 Bridge from Richland to the northwest. 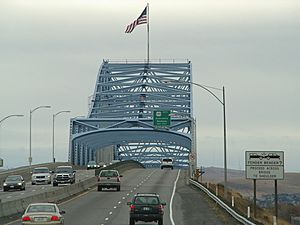 The bridge was first proposed in 1949 as the previous bridge (commonly referred to as the "Green Bridge") was unable to handle the 10,000+ cars that were crossing it daily. Work on the bridge was begun in 1951. Work was completed in the summer of 1954 with a total cost of about $7 million. The bridge was dedicated on July 30, 1954. A United States flag flies atop the bridge, which was added during the re-decking of the bridge in 1989.

During rush hour, the junction of U.S Route 395 and State Route 240 on the southbound side of the bridge is especially crowded. Late in 2005, it was announced that funding had been obtained in order to remedy the situation, by modifying the approaches and exits to the bridge, especially at the Highway 395 southbound exit on the Kennewick side of the bridge. This included constructing two roundabouts in place of the usual cloverleaf pattern. Construction began February 23 and was completed in October 2009.

All content from Kiddle encyclopedia articles (including the article images and facts) can be freely used under Attribution-ShareAlike license, unless stated otherwise. Cite this article:
Blue Bridge (Washington) Facts for Kids. Kiddle Encyclopedia.